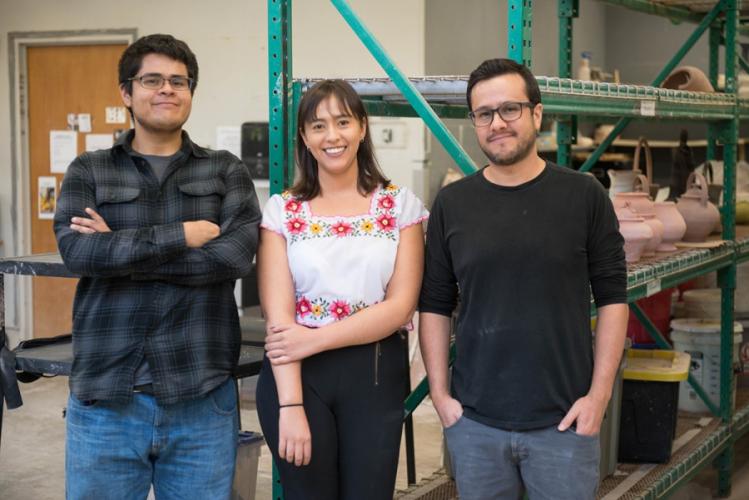 Aldo Ornelas, Gaby Hijar and Erik Ordaz Lozano are among the current artists who have traveled from hometowns in Mexico to further their education as graduate students in the SFA School of Art. 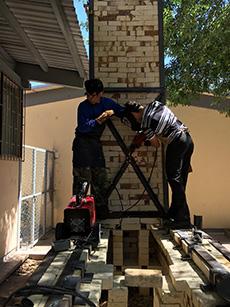 Students at La Universidad Autonoma de Chihuahua in Mexico work to construct the first wood fire kiln in Northern Mexico. The project was another of SFA Professor of Ceramics Piero Fenci’s artistic collaborations with the university.

For several years, the FVA has awarded scholarships to students from Mexico who would like to enroll in the School of Art’s ceramics program but could not afford to do so. These opportunities exist in part due to the influence of SFA Professor of Ceramics Piero Fenci and his collaboration with the ceramics program at La Universidad Autonoma de Chihuahua, Mexico.

Fenci recently returned from another successful trip to work with ceramic students at La Universidad Autonoma de Chihuahua. While there, he was instrumental in helping to build the first wood fire kiln in the history of Northern Mexico“My trip to La Universidad Autonoma was glorious, as always,” Fenci said. “Adan Saenz, my ex-MFA student who runs the program there, his students and I worked for a solid week to finish the job of constructing the new wood fire kiln, a copy of the one we built at SFA several years ago. It’s the first wood fire kiln in Northern Mexico.

“A wood fire kiln uses wood as fuel, just as the anagama kilns of Japan that have been used for centuries,” he continued. “The results are spectacular, as the falling ash in the ware chamber of the kiln land on the work, and then the ash melts into glaze at 2,400 degrees causing a lovely effect prized by ceramic art enthusiasts everywhere.”

The FVA continues to foster similar relationships through scholarships. Gaby Hijar, Erik Ordaz Lozano and Aldo Ornelas are among those who have traveled from homes in Mexico to further their education as graduate students at SFA. Hijar recently began her second-year graduate studies in the School of Art, and Lozano and Ornelas have begun their graduate work in the ceramics program.

"I cannot believe how much I've learned in the last two years studying at SFA,” Hijar said. “The best thing about studying here is meeting wonderful people. Not only are my classmates and professors great, everyone here is always willing to help each other and share their knowledge. I can't wait to do the same in my community after I finish my degree."

“I hope to contribute in a positive way to the artistic community through my previous knowledge and experiences which I have acquired over time in the labor and artistic fields,” Ornelas wrote in his application letter to SFA. “At the same time, I am committed to being a positive influence for my peers, both graduate and undergraduate students, and to be an active member in the local art field not only within SFA, but also within the state of Texas.”

Before arriving in Nacogdoches, Ornelas was an art and pottery teacher in Chihuahua. He described his work as “a blend between the classical art prevalent at my former university and the personal search for self-expression.”

“During my time as a graduate student, I wish to promote the artistic and cultural exchange between my former university and SFA, as well as other artistic spaces inside and outside the country,” he wrote. “In addition to fulfilling my personal goals and contributing positively to the artistic and cultural development of Nacogdoches, I wish to share my knowledge with other artists (worldwide), and I consider SFA the ideal place to achieve that goal.”

When Lozano completed his undergraduate degree in industrial design, he began searching for a graduate program to continue his education.

“I had always dreamed of going abroad, but it really was beyond my means in every possible way,” he wrote in his scholarship application. He looked for a program in Mexico “that was really exciting for me,” but he soon realized that the type of program he wanted to pursue was not available in Mexico.

“Not because graduate programs in my country were bad; there are a lot of really good ones,” he wrote. “But there is not a single program focused on the artistic and personal development in a field like ceramics.

“For me to attend SFA is an incomparable and once-in-a-lifetime opportunity that I feel incredibly fortunate to have,” he added. “I am convinced that the School of Art will provide the opportunities I have not had to explore the ideas, concepts, emotions and feelings that exist inside me.”

Lozano wrote that he hopes to show SFA and Nacogdoches his commitment to making positive academic and artistic contributions to the community.

“I know that if I manage to leave even a small trace of my passing through SFA and Nacogdoches, I will have used my time there in the best possible way,” he wrote. “I wish that, through my work, one day, you will be as proud of me as I am proud of going to school there.

“I hope to generate strong and lasting professional relationships as well as friendships that go beyond an academic program,” he said, adding that he hoped to establish “partnerships that can contribute and generate knowledge both for SFA and Nacogdoches and my future workplace and professional development upon returning to Mexico.”

The result of Fenci’s yearly visits to Mexico is that talented Mexican students put SFA in their sights.

“The hope is that more will matriculate in the future,” he said. “I must add that the help of the Friends of the Visual Arts has been a lifesaver for this program. Their generosity helps make the international component possible.”