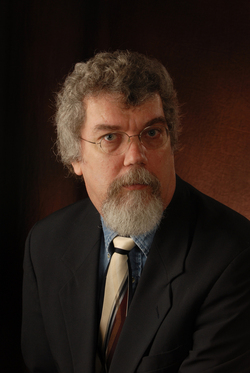 An APO advisor at various universities off and on for 15 years, including the past six for SFA's Beta Phi cast, Jones will now preside over the organization's annual meeting. He is also responsible for reviewing nominations for honorary memberships and determining scholarship recipients, among other duties.

Jones believes that his appointment as national president is, in part, "a validation" of his work as a faculty member and an APO advisor over the years, but even more so, it is about what SFA's Beta Phi cast has accomplished: a series of Presidential Service Awards and two national scholarship winners since he's been advisor.

"Obviously, having my name and institutional affiliation on the Alpha Psi Omega website doesn't do us any harm," Jones said, "and, since the annual meeting of APO is held at the Southeastern Theatre Conference (the largest theatre conference in the country), I'll now be attending SETC on a regular basis, giving us further visibility."

APO casts operate differently at different universities, Jones explained. Some are simply honorary, in that you earn membership and a line on a resume.

"Others, like SFA's cast, are much more active as service organizations," he said. "For our students, becoming a member serves mostly as an opportunity to do more work: to plan events, ranging from an ice cream social early in the fall to the end-of-year banquet, to house manage or run the box office for Downstage productions, or to assist with community events like the Little Princess Tea Party or at Millard's Crossing.

"Recently, the Beta Phi cast has averaged more than 50 volunteer service hours per member per year," Jones said. "I'm sure this level of service was instrumental in APO being named the Small Organization of the Year at this year's ODK awards."

Jones' first association with APO came the summer between his senior year in high school and freshman year in college, he said. "I had done a (very) little theatre in high school, but I had no intention of making a career of it," he said. "But that summer, a friend was working on a production at the local college, and they needed someone to play a small part, so I did it, mostly as a favor to her. But I also got introduced to a number of students in the college program, and they all talked about their cast of Alpha Psi Omega.

"My undergrad college didn't have a cast, so my next association was when I took over the theatre program at Union College in Kentucky in 1979," Jones said. "I was essentially a one-person department, so I pretty much automatically became the APO advisor. Then I was the founding sponsor for the cast at Cornell College in Iowa. When I came to SFA in 2001, Allen Oster was the advisor to APO. The student members asked me to replace him after his retirement, and, of course, I was pleased to do so."

Jones earned a bachelor's degree from Dartmouth College, master's degree from the University of Birmingham, U.K., and a doctorate from the University of Kansas. Previous teaching includes full-time positions at Union College in Kentucky and Cornell College in Iowa, plus graduate assistant or adjunct positions at Cornell University, New York; Colby-Sawyer College, New Hampshire; the University of Kansas, and Emporia State University, Kansas. He's taught a variety of subjects, from Eastern Civilizations to Stagecraft and Lighting to Journalism Practicum. But he considers himself as primarily a theatre historian with a specialty in Irish theatre.

Jones has published articles, chapters and reviews on a wide range of theatre-related topics, and he was a Summer Scholar at the NEH Summer Institute "What is Gained in Translation" at Kent State University in 2015. At SFA, his normal teaching rotation consists of a two-course sequence in theatre history, beginning and advanced courses in play analysis, beginning directing, and topics courses (including a biennial study-abroad trip to Ireland). He received SFA's 2007 Teaching Excellence Award for the College of Fine Arts and was named Faculty Mentor of the Year at last year's Undergraduate Research Conference.

Jones has directed more than 40 plays since graduating from college, including 19 at SFA. He is an active member of the Association for Theatre in Higher Education and of the Professional Advisory Board of the Department of Theatre at the University of Kansas.