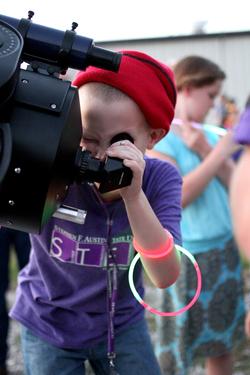 Elijah Duckworth views the moon through a high-powered telescope at the Stephen F. Austin State University Observatory during a constellation party. The party was one of many events SFA’s College of Sciences and Mathematics’ STEM Research and Learning Center organized for its Lil’ STEM Jacks outreach program. 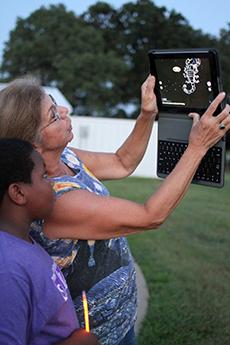 Utilizing an iPad and the Skyview app, Dr. Nola Schmidt, STEM Center curriculum coordinator, and Xavior Walker map out a constellation at the SFA Observatory. 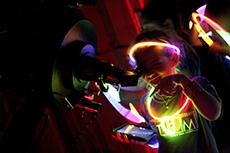 After nightfall, Molly Childs, a participant in SFA’s Lil’ STEM Jacks program, is able to see Jupiter and four of its moons through a high-powered telescope at the SFA Observatory.


NACOGDOCHES, Texas — With iPads raised to the sky, dozens of Lil’ STEM Jacks and their family members map the constellations using the Skyview app as night falls over the Stephen F. Austin State University Observatory.

As lines connect stars into shapes, animals, gods and goddesses on the iPad, viewers have a clearer picture of constellations millions of miles away. Suddenly, what looks like a shooting star whizzes by, and the crowd buzzes with excitement.

“It’s the International Space Station,” many shout as they lift their iPads to the stars to confirm.

Recently, participants in SFA’s Lil’ STEM Jacks, a two-day outreach program offered within the College of Sciences and Mathematics’ STEM Research and Learning Center, had an out-of-this-world experience as they traveled to the SFA Observatory for a constellation party.

“We were so excited to have our Lil’ STEM Jacks at the observatory. The students were able to see so much more by using technology. The iPads gave them the ability to explore and see what they wanted to see,” said Julie Sandifer, kindergarten through 12th grade outreach coordinator for SFA’s STEM Research and Learning Center.

Utilizing high-powered telescopes, attendees were able to view craters on the moon, see the patterns on Jupiter’s surface and its four moons, and clearly see Saturn and its rings.

“It’s easy to talk about the planets and show students photographs, but to actually have them see Saturn, Jupiter and the moon up close through a telescope is a whole new, amazing experience,” Sandifer said.

The constellation party was one of many events the Lil’ STEM Jacks enjoyed. During the two-day program, participants investigated the biology of plants and made take-home planters, learned about the planets, played planet bingo, explored the nursing and the medical professions, took part in demonstrations using medical mannequins, and participated in a wildlife show. Another highlight was the EV3 Lego Mindstorms, where students programmed robots to move, make sounds and complete tasks.

“Our goal with the Lil’ STEM Jacks program is to encourage children to get excited about science, math, engineering and technology,” Sandifer said. “This year’s program exceeded our expectations. Not only did the kids enjoy the activities, but many family members had fun, especially at the constellation party.”