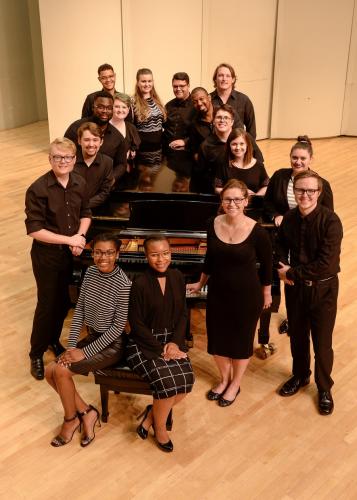 The concert will explore themes of love, nature, the divine and exotic fairy tales, according to Dr. Michael Murphy, director of choral activities at SFA.

These three French songs give an interesting twist to the fairy tale of Red Riding Hood, a song of merciless conflict and a fantasy about forest creatures, Murphy explained.

Also on the program is A Set of Chinese Folk Songs by Chen Yi, who was the first woman in China to receive a Master of Arts in Musical Composition. During the Chinese Cultural Revolution in 1969, Chen was sent to the work camps for forced labor. Even though she was unable to practice her violin for many years, she developed a love for folk songs that she would regularly hear in the countryside.

The SFA Madrigal Singers will perform three of her folk song arrangements. “Diu Diu Deng” has the choir portraying a steam locomotive. “Mayila” is a song about a young girl singing songs and playing the dongbula. And, “Riding on a Mule” exhibits vocal percussive sounds and pentatonic melodies. Now a professor of composition at the University of Missouri-Kansas City, Chen weaves western and eastern influences into her musical compositions.

The ensemble will also perform Igor Stravinsky’s setting of T.S. Eliot’s “The dove descending breaks in the air,” which is composed as a serial or twelve-tone composition.

“The descending dove signals the entrance of the Holy Spirit into the world in order to cleanse humanity,” Murphy explained.