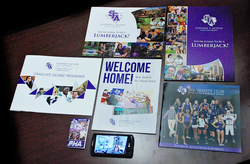 NACOGDOCHES, Texas - Stephen F. Austin State University was recognized recently by two organizations - Educational Advertising Awards and Collegiate Advertising Awards - for the quality of marketing materials produced on behalf of the university. The honors included gold, silver, bronze and merit awards in 12 categories for work created by SFA's offices of University Marketing Communications and Admissions, as well as the Houston-based Richards/Carlberg agency.

A recruiting booklet titled, "You're Going to Be a Lumberjack!" created by the marketing office and the admissions office received an Educational Advertising gold award. The SFA viewbook, a companion piece to the booklet, was recognized with a merit award.

Additionally, Educational Advertising presented UMC with three merit awards for a residence life brochure, a cheer guide booklet, and a graduate degree program brochure for the College of Sciences and Mathematics.

The Richards/Carlberg agency won a gold award for the university's website, a bronze for the "Lumberjacks Make Great Chemists" billboard and a merit award for "We are the Lumberjacks," a video featured on the homepage of the SFA website.

"The awards programs are judged by a national panel of higher education marketers and advertising professionals," said Dr. Shirley Luna, SFA executive director of University Marketing Communications. "Receiving these awards validates that the marketing and advertising materials created for SFA are among the best in the country."

The 32nd annual Educational Advertising Awards, sponsored by Higher Education Marketing Report, received more than 2,250 entries this year from more than 1,000 colleges, universities and secondary schools from all 50 states and several foreign countries.

The Collegiate Advertising Awards received more than 900 entries from across the U.S. representing a diverse plethora of educational facilities from small community colleges to large schools and universities.

"A wide range of categories cover virtually all possible entries from branding, social media, recruiting and fundraising to multimedia campaigns, educational fairs and blogs," Luna said. "The awards competitions recognize the best of the best. I'm very proud that SFA's entries were recognized from among the more than 3,000 received."