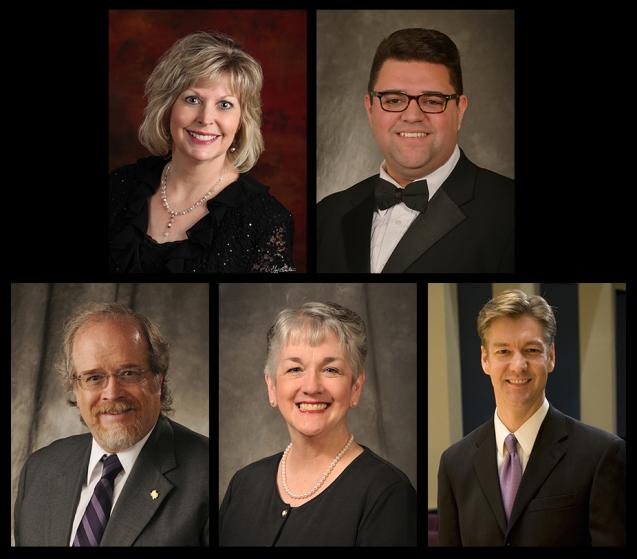 
NACOGDOCHES, Texas - Student and faculty voices will be featured when the A Cappella Choir at Stephen F. Austin State University presents a full performance of G.F. Handel's great oratorio, "Messiah," at 7:30 p.m. Saturday, April 8, in Cole Concert Hall in the Wright Music Building on the SFA campus.

Dr. Tim King, director of choral activities in the SFA School of Music, will conduct Handel's best-known work. The performance will showcase many of King's colleagues as soloists.

"For 40 years, I have been blessed to work with the most talented voice teachers that you will find anywhere," King said. "Not only are they great teachers, but they are fantastic performers willing to share their talent. This fulfills the charge of an educator - to do whatever it takes to make our student performances musical, exciting and meaningful."

Chavira completed his bachelor's degree in music education at SFA in 2016 and will complete his master's degree in choral conducting in 2018. He holds a position as a graduate assistant in the College of Fine Arts. He is a performing member of the A Cappella Choir and Madrigal Singers and holds membership in Mu Phi Epsilon and Pi Kappa Lambda. He has performed in SFA's opera productions singing in the chorus for "La Traviata," as King Kaspar in "Amahl and the Night Visitors," and as Lippo Fiorentino in "Street Scene."

LaGraff, a baritone, has sung leading and supporting roles with such companies as Tri-Cities Opera, Syracuse Opera, Pensacola Opera, Tulsa Opera and Opera East Texas. He has also appeared as a concert soloist with the East Texas, Syracuse and Baton Rouge symphonies, as well as the Syracuse Oratorio Society, the Canterbury Choral Society in Oklahoma City and at Carnegie Hall with MidAmerica Productions. LaGraff's first CD, "Songs by Stephen Lias, Michael Patterson and Lee Hoiby," was released by Centaur Records in 2009, and a second CD, "Incline Thine Ear and Other Sacred Songs," also with Centaur, is schedule for release April 7. A native of Athens, Ohio, he holds degrees from the Cincinnati Conservatory of Music, SUNY-Binghamton and Louisiana State University. LaGraff joined SFA's faculty in 2004, after having taught at Simpson College and Cornell University.

Davis, a native of Tucson, Arizona, holds a Bachelor of Music degree in vocal performance from the University of Arizona and a Master of Arts degree in vocal performance from SFA. Her stage experience includes roles in productions of "The Tales of Hoffmann," "A Little Night Music," "Susannah," "Albert Herring" and "The Impresario." She performs regularly in the East Texas area, and has performed at SFA as the soprano soloist in Beethoven's "Missa Solemnis," Handel's "Messiah" and Ralph Vaughan Williams' "Hodie."

Debbie Berry, soprano, is a native of Wichita Falls. She received her bachelor's and master's degrees in voice performance from SFA. After a teaching stint at Wayland University, she moved to Kansas City where she did post-graduate work at the Conservatory of Music at the University of Missouri-Kansas City. Her performance credits include solos with the Kansas City Philharmonic, the Kansas City Civic Orchestra, the Longview Opera Repertory Company, the Central City Singers (of the Central City Opera House Association), and regular appearances as a recitalist in Denver, Kansas City and East Texas. Among her operatic roles are as Violetta in "La Traviata," Donna Anna in "Don Giovanni," Musetta in "La Boheme," Baby Doe in "The Ballad of Baby Doe," Rosina in "The Barber of Seville," the Witch in "Hansel and Gretel," and Gilda in "Rigoletto." Her oratorio repertoire includes the soprano solos in Mozart's "Requiem," Brahms' "Ein deutches Requiem," Orff's "Carmina Burana," and Haydn's "The Creation." She has performed extensively in musical comedy: Widow Corney in 'Oliver," Maria in "The Sound of Music," Sarah Brown in "Guys and Dolls," Julie Jordan in "Carousel," Eliza Doolittle in "My Fair Lady," Hodel in "Fiddler on the Roof," Fiona McLaren in "Brigadoon," Magnolia in "Show Boat," and Lilly in "Kiss Me Kate."