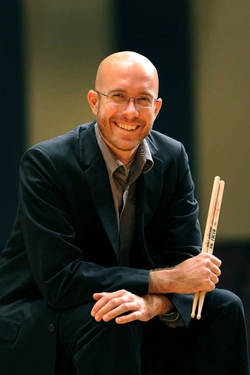 The performance is part of the School of Music's Cole Performing Arts Series and will feature the world premiere of Alexis Bacon's "Ojibwe Song" as well as premiere performances of Steven Snowden's "The Taos Hum" and Francisco Perez's "Pulsar."

"Ojibwe Song" is a nine-minute electroacoustic piece for percussion and fixed media. The percussion and a recording of an interview with Alphonse Pitawanakwat, a First Nations Ojibwe speaker who has been contributing to the rebirth of the Ojibwe language, intertwine to create an atmosphere that carries the listener on an emotional journey, according to Bacon.

"The percussionist acts as the protagonist while the audience is surrounded by evocative atmospheric sounds that portray the drama of the story suggested by the recordings," Bacon wrote in describing the piece. "My goal with this and with my other electroacoustic works is to explore ways in which some of the complex tapestry of American voices can be heard through my work."

The Taos Hum is an audio phenomenon reported by a small but sizable portion of people living in and around Taos, New Mexico. It is commonly heard as a persistent low frequency humming, rumbling or droning, according to Snowden.

"So many wild stories have been concocted to explain the Taos Hum, and I wanted to explore that particular aspect of this phenomenon in this piece," he said. "From a distant rumble, a diverse landscape of timbres and textures emerge and envelope the sonic landscape only to retreat back into their origins of cryptic obscurity."

Named after the rhythmically static astronomical entity, "Pulsar" is the result of the composer's exploitation of a reoccurring rhythmic and melodic motif.

"Sonically mimicking the massive density of the neutron star, the active interplay between the live performer and playback is inspired by the electronic music of Moderat (a three-piece electronic music project) and the rudimental style of Mike McIntosh (a percussion specialist)," Perez wrote in describing the work.

The program also includes a performance of Perez's "Tesseract."