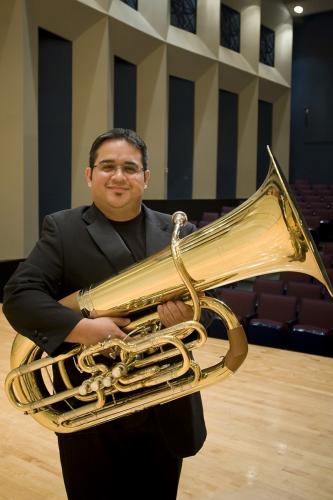 Salas, associate professor of tuba and euphonium studies, said each program selection is meant to highlight the tuba’s ability to perform in several styles that are not commonly found in the repertoire.

“Many people think of the tuba as a ‘background’ instrument in the band or as the bass line to a polka or a march,” he said. “These recital selections each illustrate the beautiful tone and technical versatility of the instrument.”

The program features “Sweet Dances” by Elizabeth Raum, which is a work for unaccompanied tuba that looks to emulate several of the collections of dances composed by Johann Sebastian Bach “but in completely updated fashion,” Salas explained. Instead of traditional titles such as the Gavotte or Sarabande, Raum uses whimsical titles like “Blew Tango” or “Waltzn’ Matuba,” in addition to the jazz rock dance titled “ A Hard Knight’s Day.”

“Five Muses for Tuba and Piano” by John Stevens is a relatively new work in which Salas was part of the commissioning consortium with several other tuba performers and educators.

“This piece explores the vast range the tuba can perform, which is about five octaves,” he said. “Each movement depicts one of five of the nine muses found in Greek mythology:  Euterope, song; Thalia, comedy; Melpomene, tragedy; Terpsichore, dance; and Erato, love.”

Also on the program, “Diversive Elements” by David Gillingham is a trio for tuba, euphonium and piano. It illustrates the complex rhythmic elements between the three instruments through five short movements.

The recital is the first of several events for the 12th annual Octubafest at SFA, Salas said. Octubafest is an event that occurs at many universities around the world seeking to highlight the tuba and euphonium for their solo and chamber repertoire. Other events in the series include guest artist performances by Andrew Hitz, tuba (formerly of the Boston Brass), on Oct. 9; Stephen Kunzer, tuba (professor of tuba/euphonium at OSU), on Oct. 27; the euphonium quartet fLOW on Oct. 11; and performances by the entire SFA Tuba-Euphonium Studio and the SFA Tuba-Euphonium Ensemble.