SFA’s Orchestra of the Pines to performs works of Tchaikovsky, Rimsky-Korsakov 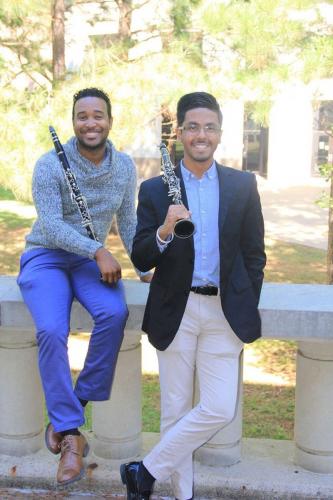 SFA music students Gary Jones and Cesar Montelongo will perform a classical concerto for two clarinets and orchestra during a performance of the Orchestra of the Pines at 7:30 p.m. Tuesday, Nov. 14, in Cole Concert Hall on the SFA campus.


NACOGDOCHES, Texas – The Orchestra of the Pines at Stephen F. Austin State University will present “Charismatic Capriccios and Dynamic Duos” at 7:30 p.m. Tuesday, Nov. 14, in Cole Concert Hall on the SFA campus.

The program includes two popular works, “Capriccio Italien” by Pyotr Ilyich Tchaikovsky and “Capriccio Espangol” by Nikolai Rimsky-Korsakov. Both written by Russian composers, the works were inspired by their visits to surrounding European countries, according to Dr. Gene H. Moon, director of orchestras in the SFA School of Music.

“Both works are virtuosic in nature and showcase soloists throughout the entire orchestra,” Moon said. “I’m excited to see these two works programmed in the same evening.”

To show off SFA’s string students’ talent, the string sections will perform without winds, brass and percussion in the beautiful elegiac “Serenade for Strings” by Edward Elgar.

“The Elgar serenade is one of several major string serenades in the oeuvre,” Moon said. “The work is songful and captivating with sonorous melodies and rich harmonies.”

The concert’s guest soloists are clarinetists Gary Jones and Cesar Montelongo, who will perform a dynamic classical concerto for two clarinets and orchestra, Moon said.

“These two really put on a show when they share the stage,” he said. “I can still see their performance during our concerto competition last April and remember the dynamic energy these two shared in this work. Both Gary and Cesar have been pivotal members of the orchestra program at SFA, and I am so happy to have them share the stage as our guest soloists!”

A native of New Orleans, Louisiana, Jones is earning a master’s degree in wind conducting and an artist diploma in clarinet performance at SFA. He earned a Bachelor of Music Education degree with a focus on multi-woodwind pedagogy and a minor in piano from SFA.

Jones is active both as a conductor and recitalist. He has performed throughout the United States, notably in New York and Oregon. Currently, he performs with the SFA Wind Ensemble and holds the principal clarinet position in the Orchestra of the Pines. He has also presented master classes and has been an adjudicator throughout Texas and Louisiana. In addition to playing the clarinet, Jones maintains a private teaching studio. He serves as the graduate teaching assistant for The Lumberjack Marching Band, conducts the Roarin’ Buzzsaws Basketball Band, and serves as the director of music at Johnson Chapel CME Church in Nacogdoches.

A senior music education major, Montelongo is a native of Dallas working toward earning a Bachelor of Music Education degree. Prior to beginning his studies at SFA, he held the principal clarinet chair for the Arlington Youth Symphony’s inaugural year and was an active member in the Mansfield Wind Symphony.

Montelongo has performed in New York, as well as throughout Texas. He is the current principal clarinetist in the SFA Wind Ensemble and is a member of the Orchestra of the Pines. Aside from performing with concert ensembles, Montelongo is also the current drum major of The Lumberjack Marching Band.