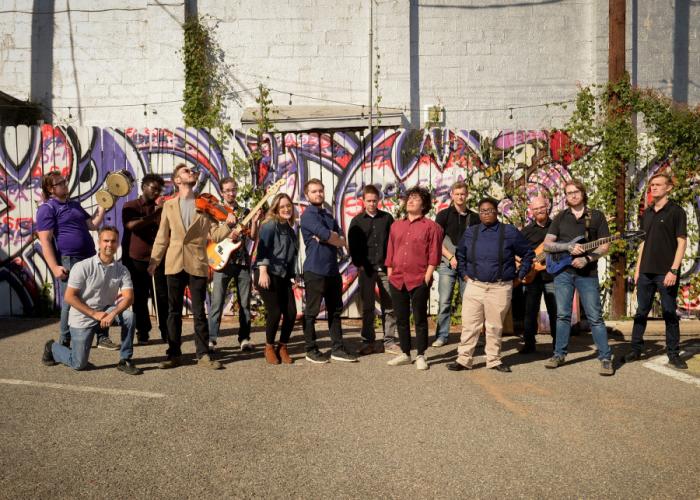 The concert theme was selected to continue the group’s progression of study through the eras of pop/rock music that began with the ensemble’s inception three years ago, starting with music of the 1950s and ’60s, according to Andrew Sperandeo, instructor in the School of Music’s Sound Recording Technology program and director of the Rockin’ Axes.

“As always, I try to incorporate many different styles into the set to get a broader picture of the music from that given decade, as well as having a concert that offers something for everyone,” Sperandeo said.

Among the concert selections are “Satellite” by The Dave Matthews Band.

“I chose this group because I always enjoyed their very ‘earthy,’ natural acoustic instrumentation – violin, sax, acoustic guitar, bass drums, keys,” Sperandeo said. “Also, the level of musicianship, along with Matthews’ unique compositions, made them fun to listen to and play.”

Also on the program is Maroon 5’s “This Love.” “This was just such a fun pop/rock funk tune from the early 2000s – I just had to include it,” Sperandeo said.

The Rockin’ Axes will perform “Uprising” by Muse, which Sperandeo describes as “another really talented band.”

“The students have been asking to do some Muse for quite some time,” he said. “I had to choose the right semester for it. I particularly love the singer’s versatility and timbre.

“The students have done a great job preparing for this show, and audience members should really enjoy themselves,” Sperandeo added. “We look forward to having everyone come out and support the Rockin’ Axes.”