SFA's Rockin' Axes to present 'The History of Rock' 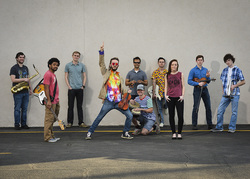 SFA's Rockin' Axes will perform "The History of Rock" at 7:30 p.m. Thursday, March 30, in the Twilight Ballroom of the Baker Pattillo Student Center on the SFA campus. Admission is free.

NACOGDOCHES, Texas - The Stephen F. Austin State University College of Fine Arts and School of Music will present the Rockin' Axes performing "The History of Rock" at 7:30 p.m. Thursday, March 30, in the Twilight Ballroom of the Baker Pattillo Student Center on the SFA campus.

The high-energy concert will feature music originally recorded by rock and pop favorites Elvis Presley, The Beatles, Michael Jackson, Earth, Wind and Fire and others, according to Andrew Sperandeo, director of the Rockin' Axes groups.

"We have been progressively going through every decade, starting in the 1950s, since this ensemble's inception," Sperandeo said. "This semester, I decided we would essentially do some of the best charts from every semester, tailor-made for the current instrumentation, as a 'greatest hits' semester, which, in turn, really is the 'history of rock' from the '50s through the '80s."

Sperandeo said every artist he chose to be represented in the concert "somehow revolutionized some parameter of music, either with their writing, instrumentation, crossing genres and even social norms."

Among the program selections is Presley's "Love Me Tender." The song, recorded by Elvis in 1956, was written by Ken Darby and based on the old Civil War tune, "Aura Lee," Sperandeo explained.

"I decided to arrange the 'Cirque Du Soleil Viva Elvis' version for the group because it is an absolutely beautiful arrangement not to be missed," he said.

The Rockin' Axes will also perform "Eleanor Rigby," released by The Beatles in 1966.

"This has always been my favorite Beatles song," Sperandeo said. "In my opinion, this song epitomized the music-writing philosophy The Beatles had during this time. The whole arrangement consists of a string quartet and vocals only, which demonstrates that you don't always have to follow the norm and, as a writer/arranger, you should be willing to take chances."

Sperandeo's arrangement expands on this idea, incorporating a much larger ensemble to include brass, woodwinds and rock rhythm sections. "I also tried to stay true to the innovative process by including many rhythmic variations and dynamic interests," he added.

Earth, Wind and Fire's 1978 release of "September" is also on the program. Sperandeo's arrangement took some ideas for the ending from the live version of this song where the band Chicago played along side Earth, Wind and Fire in a powerful performance, he said.

Jackson's "Thriller," written by Rod Temperton, has been a Rockin' Axes crowd pleaser in previous concerts, and this performance will be no exception, Sperandeo said.

"Every song was carefully chosen to represent some specific characteristics that well defined music for each decade from the '50s to the '80s," he said. "I believe this will be one of the best performances by these groups to date because of the diversity of the set lists. Come out enjoy all the great music we have in store!"

The Contemporary Ensemble will also perform several Stevie Wonder hits during the concert.