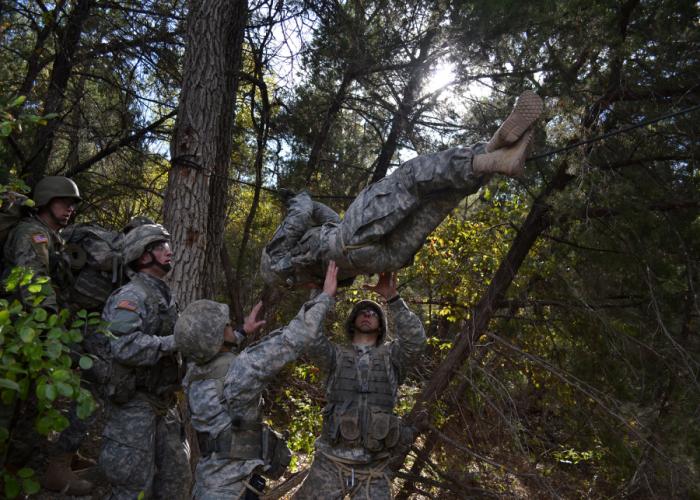 The regional competition pitted members from 13 Army ROTC programs in events aimed at testing their endurance and skill levels in varied activities. Cadets showcased their talents in an Army physical fitness text, a communications lane, weapons disassembly and reassembly, 10-mile march and other activities.

“The ROTC program has gained a full head of steam during past years with the continual motivation to be the best leaders on campus,” Walker said. “The addition of incredible cadre members who help cadets in every imaginable way has developed a culture of discipline and fitness that is hard to beat.”

SFA’s cadets trained six days a week for eight weeks to prepare for the competition. According to Walker, the teams’ fitness levels had to be assessed before they could begin their training schedule.

“We had to assess where we needed to improve the most before we started our workouts,” Walker said. “After our assessment, we figured most of our training time should be spent on physical toughening and aerobic conditioning.”

According to SFA senior military instructor Raul Cantu, the teams’ training focused on cardiovascular conditioning and strength training with additional practice on specific tasks in which the teams would compete.

Lt. Col. Paul Pfeiffer, chair of the SFA Department of Military Science, said he expects SFA’s program to be very competitive again at next year’s competition.

“The depth of our teams is encouraging,” Pfeiffer said. “This year, we fielded two teams that both did well. It takes time to build success, and we are getting there.”