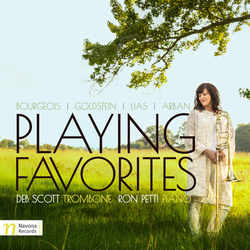 "Playing Favorites" features Scott on trombone, accompanied by Dr. Ron Petti, director of accompanying for the SFA School of Music, on piano. Scott and Petti have been touring to promote the release of the CD with recent performances at Texas Tech University, Texas Christian University, the University of Oklahoma and, forthcoming, the University of Alabama.

In a review of the CD, Colin Clarke with Fanfare Magazine writes, "There is absolutely no doubt as to the sheer eloquence of Deb Scott's trombone playing," and that Scott is "an astonishingly talented brass player; one awaits her next release with anticipation."

The CD, released by Navona Records, features a collection, as the title suggests, of Scott's favorite works. One piece specifically composed for her by SFA Professor of Composition Stephen Lias is among the selections. "River Runner" sets to music a three-day trip by Lias, Scott and their spouses through Big Bend's Santa Elena Canyon. Derek Bourgeois's Trombone Concerto, William Goldstein's "Colloquy," and Jean-Baptiste Arban's variations on "The Carnival of Venice" are also featured.

The first woman to attain a doctorate in trombone performance at the University of North Texas, Scott was a featured soloist and faculty member last year at Trombonanza in Santa Fe, Argentina. She has performed with the Shreveport Symphony, Shreveport Opera, Longview Symphony, the Twentieth Century Unlimited Orchestra in Santa Fe, the New Mexico Music Festival Orchestra in Taos, the Orchestra of the Pines, the Lubbock Symphony Orchestra, the Greeley Philharmonic, and the Barnum and Bailey Greatest Show on Earth Circus Band. She has performed with such artists as J.J. Johnson, Louis Bellson, Diane Reeves, Frank Mantooth, Phil Woods, Lee Greenwood, the Mills Brothers and the Ink Spots.

The mini recital will be at 6 p.m. in the church sanctuary followed by a reception at 6:30 p.m. in the parish hall with refreshments provided by Newk's Eatery. Admission is free. CDs and downstream cards will be available for purchase. Christ Episcopal Church is located at 1430 N. Mound St.