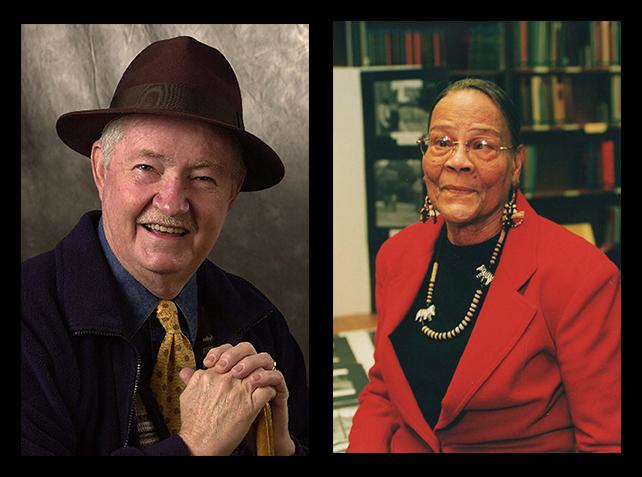 “Dr. Johnson and Mrs. Wade are both well-deserving recipients of this award, as they both dedicated much time and effort to preserving the history of Nacogdoches and East Texas,” said Carolyn Spears, director of the Stone Fort Museum.

The award recognizes Johnson for his work documenting oral histories in Nacogdoches that preserve East Texas’ stories. Professor Emeritus and former Regents Professor, Johnson conducted more than 1,000 interviews throughout his career with residents of East Texas on a range of topics, including the Great Depression, World War I and II, the oil boom in East Texas, and Coushatta Native Americans. He also authored dramatic productions based on the oral histories he collected.

Johnson has published many works, including “A Texas Tragedy: The New London School Explosion,” the play “East Texas Talks” and “From Pine Trees to Paper: Interviews with Southland Paper Employees.”

In 2008, Johnson was awarded the Thomas L. Charlton Lifetime Achievement Award by the Texas Oral History Association for his significant contributions to the field, and the East Texas Research Center honored him by opening the Bobby H. Johnson Oral History Collection that same year.

Wade’s African-American Heritage Project, 1904-2009, began around her kitchen table with friends and family members and documents more than 100 years of the African-American community in East Texas through the preservation of documents, newspaper articles, photographs, oral histories and more. She also helped secure the backing of the Nacogdoches County Historical Foundation and the city in efforts to preserve the Zion Hill Church building as a future home for a Black Heritage Museum.

Sometimes the subject of research, Wade was interviewed multiple times for books and projects regarding the African-American experience in Nacogdoches during Jim Crow and desegregation. Her experiences are documented in “Freedom Chronicles: Independent Black Texans in the Time of Jim Crow” by Thad Sitton and James H. Conrad, and “March! The Fight for Civil Rights in a Land of Fear: Nacogdoches, Texas 1929-1975” by Stephen D. Delear. Additionally, Jeri Mills featured Wade in “African-Americans in Nacogdoches County.”

Wade believed in the importance of education and actively tutored her own children as well as many others.

Wade passed away in 2005, but her legacy lives on. SFA’s ETRC houses the catalogued African-American Heritage Project, which includes books, articles, photographs and video.