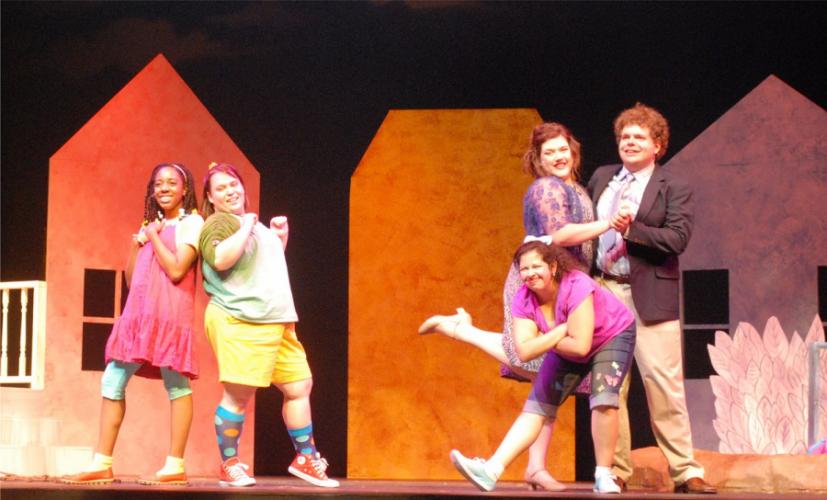 
NACOGDOCHES, Texas – When Angela Bacarisse begins to consider children’s shows she may want to direct for the annual SummerStage Festival at Stephen F. Austin State University, a desire to promote and encourage reading is at the heart of the decision.

The School of Theatre professor who has directed summer kids' favorites like "The Emperor's New Clothes: The Musical," "How I Became a Pirate" and last year’s "A Year With Frog and Toad," Bacarisse often draws from personal experience and a love of reading to her own son to make the choice.

“I have always loved reading,” Bacarisse said.“I remember visiting the library in my hometown during summer breaks. It has really been rewarding to create a relationship with our local libraries to encourage participation in the arts and reading.”

This year’s SummerStage children’s show “Ivy + Bean the Musical” ties in perfectly with the Nacogdoches Public Library’s summer reading campaign “Build at Better World” in that the show encourages making the world better by making new friends, according to Bacarisse.

“At first, Ivy and Bean are not interested in being friends, even though their parents encourage them to do so,” Bacarisse explained. “They learn that you can’t ‘judge a book by the cover’ and discover that they have much more in common than they thought when they take the time to get to know each other.”

With book, music and lyrics by Scott Elmegreen and based on books by Annie Barrows as illustrated by Sophie Blackall, “Ivy + Bean the Musical” invites the audience to meet quiet Ivy, who has amazing ideas, and outgoing Bean, who loves to put ideas into action. The mischievous second-grade heroines of The New York Times best-selling stories plot their exploits onstage in this lively musical, Bacarisse said.

“The show has mischief and laughter at every turn – along with lessons to be learned about the challenges and joy of family, friendship and love,” she explained.

In promoting the show, SFA theatre students have performed scenes from “Ivy + Bean the Musical” at local libraries around East Texas, and the response has been tremendous, Bacarisse said.

Traditionally, summer reading programs are designed to encourage elementary-aged children to keep reading during summer vacation. “Build a Better World” is this year’s Collaborative Summer Library Program theme. CSLP is a consortium of states working together to provide a unified summer reading theme along with professional art and evidence-based materials so that member libraries can provide high-quality summer reading programs, according to information at cslpreads.org.