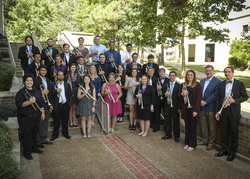 Also known as The Wrecking Crew, the ensemble is a music class, made up of mostly trumpet majors, which meets each spring, according to Stephen Campbell, visiting professor of music in the SFA School of Music and the ensemble's director.

The men's chorus, organized by Dr. Tod Fish, associate director of choral activities for the School of Music, will showcase voice faculty members Leonberger, tenor, and LaGraff, bass soloist. In addition to choral students, the chorus includes members of the SFA Chapter of Phi Mu Alpha.

The program also includes G.F. Handel's Music for the Royal Fireworks for six trumpets, organ and percussion, along with a premiere of a commissioned work for trumpet ensemble, titled "Glare," by composer Rusty Banks.

A performance of a portion of Richard Wagner's Romantic opera "Lohengrin" will feature LaGraff singing the role of King Philip.

An important notation about the Handel and Wagner works is that they are not arrangements, Campbell said.

"The musicians (trumpeters) will perform from the orchestral trumpet parts," he said. "The organ part is arranged to cover the remainder of the orchestra parts, but for the trumpeters, this is 'the real deal.' The Wagner work calls for 15 trumpets. The composer even makes an indication in the score to 'Lohengrin' that if you don't have the means to perform this particular scene, skip it and cut right to the next part. I've created an edition of this scene for this particular performance."

This fun concert will give the audience and performers new musical experiences, Campbell said.

"I know for the musicians, it'll be a unique experience," he said. "The majority of trumpet ensemble concerts typically consist of arrangements of other pieces, which end up being a rehash of something that wasn't that great to begin with. None of the selections on our program are arrangements, at least as far as the musicians are concerned."