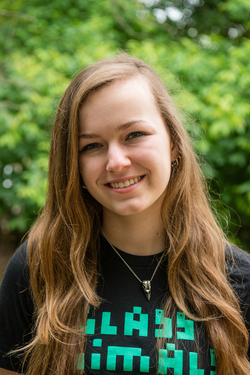 Southlake freshman Shelby Locklin is this year's recipient of the Gary Q. Frields Art Scholarship awarded by the SFA Friends of the Visual Arts.

Jeff Brewer, professor of sculpture at SFA, nominated Locklin for the award that honors the late SFA art professor. Brewer noted that he has had the pleasure of knowing, teaching, working with and mentoring Locklin for the past year. According to Brewer, Locklin is a "talented student and budding young artist."

"Shelby has a very special gift," he said. "She has the ability to see the world in three dimensions. She is a sculptor!"

Brewer described Locklin as "amazing to watch," adding she is in the studio "rain or shine, always pushing her creativity as well as her skill sets."

"Shelby not only has this wonderful gift, she also has the diligence and drive that often escape the creative person," he said. "What genuinely excites me about Shelby's work is her integration of technology into her artwork."

As a one of the leaders of SFA's Art Alliance, Locklin is responsible for planning functions, organizing fundraisers and promoting both the organization and its events, as well as coordinating the efforts of other students. Locklin attends every function for the art department, be it working all day at SFA Art Day for high school seniors or giving tours at Showcase Saturday to incoming freshmen. Also a scholar, Locklin achieved the Dean's List in her first semester at SFA and actively entered and placed in many art competitions.

"I have seen firsthand the dedication and diligence she brings to the table around the School of Art, having worked with her on several projects in her short time here," Brewer said. "Shelby would make Gary proud in her approach to looking at the world as well as making art.

"She always represents SFA in a most professional way, and I believe her attitude, skills and commitment will take her far," he added. "I look forward to watching her grow as an artist and a person."

The FVA established scholarships in the name of retiring SFA School of Art professors who were employed in the School of Art for minimum of 10 years before retirement and who contributed in a significant way to the mission of the Friends of the Visual Arts board and its fundraising activities, such as consistently donating art for fundraisers, by providing monetary assistance, or by serving on FVA committees or board.

Known among his peers as a great advocate for SFA's art students, Frields taught courses in design, drawing and sculpture and served as graduate program coordinator for the School of Art before his retirement in 2012. He was a recipient of the SFA Fine Arts Teaching Excellence Award and was appointed to the board of directors for the Texas Association of Schools of Art. Frields' involvement in national juried exhibitions helped in establishing the SFA Texas National, originating the concept and name, and designing the logo. The event brings to Nacogdoches some of the most celebrated contemporary artists as jurors. He originated the Art Prom and was a founding member of The Cole Art Center @ The Old Opera House, creating the logo and contributing to concept planning.