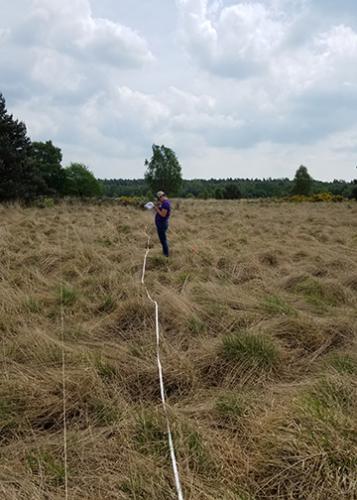 
NACOGDOCHES, Texas — Although summer has come to a close, it is the perfect time for Stephen F. Austin State University students to begin planning an adventure for the summer 2018 semester.

For students in SFA’s Arthur Temple College of Forestry and Agriculture, these summer experiences, more often than not, include collecting valuable data that will inevitably be used to guide future land management practices domestically and abroad.

Perhaps one of the best examples of the college’s ongoing initiative to create meaningful scholastic experiences for students can be found in Dr. Brian Oswald’s work assisting the Netherlands in developing the country’s first quantitatively based wildland fire risk assessment.

Since 2012, Oswald, Joe C. Denman Distinguished Professor of fire ecology at SFA, along with students enrolled in SFA’s Arthur Temple College of Forestry and Agriculture, have collaborated with public safety agencies in the Netherlands to collect fire fuel load data that will ultimately be used to develop a wildfire spread model that can predict wildfire behavior.

Will Kruckeberg and Jessica Pruneda, both senior fire management majors at SFA, are the latest students to contribute to this growing body of work.

For 10 weeks, Kruckeberg and Pruneda scoured forested and coastal regions of the Netherlands collecting fuel load data to determine the quantity of fuel classes present.

“We would go through and separate the dead and live grasses and document how many dead grasses were in a given plot,” Kruckeberg said. “It’s a lot of data to collect, but in the end it makes a really good product.”

Kruckeberg and Pruneda worked directly for the Instituut Fysieke Veiligheid, an institute for disaster relief and public crisis management in the Netherlands, and they were independently responsible for every aspect of the fieldwork.

“It was a good professional development situation because we had to be self-driven,” Kruckeberg said. “It was a good opportunity to learn how to keep going, schedule our own research plots and self-motivate.”

In addition to scientific data collection, Pruneda said the opportunity to communicate with Dutch citizens about their work was exciting and meaningful because much of the population is still not aware of the country’s growing wildland fire threat.

“I loved how we got asked a lot about what we were doing,” Pruneda said. “Many of the people we talked to were confused because they don’t think about wildland fires, but we got to explain all of the aspects of the project to them.”

Students will continue to play an integral role in collecting fire fuel load data and conducting related research throughout the country into the foreseeable future. This regional data ultimately will be combined to create a national fire model used by safety agencies.