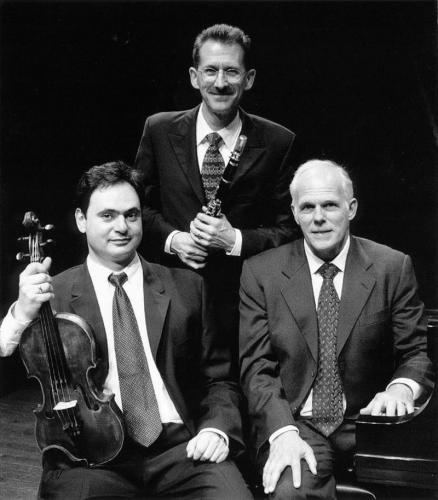 The Trio Con Brio from Texas Christian University will perform at 6 p.m. Monday, Oct. 30, in Cole Concert Hall on the SFA campus.


NACOGDOCHES, Texas – The Trio Con Brio, an ensemble of musicians from the Texas Christian University music faculty, will perform a guest recital at 6 p.m. Monday, Oct. 30, in Cole Concert Hall on the campus of Stephen F. Austin State University.

The trio is comprised of Dr. Misha Galaganov, viola; Gary Whitman, clarinet; and John Owings, piano. The program selections will include Sonata in F minor for Viola and Piano, Op. 120 No. 1 by Johannes Brahms; “Asking a Shadow to Dance” by James Scott Balentine; Sonata for Clarinet and Piano by Francis Poulenc; and Eight Pieces for Clarinet, Viola and Piano, Op. 83 by Max Bruch, written for Trio Con Brio.

Trio Con Brio has presented 11 chamber music commissions in the past five years and released their debut CD, “A Musical Celebration” featuring the music of Elena Sokolovski and Eric Ewazen, on Albany Records.

Galaganov, associate professor of viola at TCU, has performed as a soloist in Russia, Israel, Czech Republic, Holland, Belgium, Austria, the U.S. and Mexico. His solo performance with the TCU Orchestra at the 2002 Latin American Festival was named one of the ten best performances of the year in the Dallas-Fort Worth area by the Fort Worth Star Telegram. He is co-founder and co-director of the Fort Worth Chamber Music Roundup festival, which gives amateur musicians the rare opportunity to rehearse and perform with top concert artists in the same ensembles.

Whitman, professor of clarinet and division chair of woodwinds at TCU, has performed at ClarinetFest conferences throughout the United States and Europe. He has presented master classes in Mexico City, Peru, Belgium, Puerto Rico and China. In addition to his position at TCU, Whitman is the bass clarinetist of the Fort Worth Symphony, performing in the classical subscription series “Pops” and the Fort Worth Opera Festival at Bass Performance Hall.

Chair of the piano division at TCU, Owings holds the Herndon Professorship of Music. Since making his orchestral debut with the San Antonio Symphony at the age of 15, his performing career has ranged from solo and chamber music recitals in major cities in the United States, Latin America, Europe and Asia, to concerto appearances with the symphony orchestras of Cleveland, Chicago, Dallas, Denver, Fort Worth, Houston, the Boston Pops, the English Chamber Orchestra, and the National Symphony Orchestra of both Colombia and Peru.

The concert is a joint presentation of the College of Fine Arts and School of Music and is a feature of the Calliope Concert Series. Tickets are $8 for adults, $6 for seniors and $3 for students and youth. For tickets or more information, call the SFA Fine Arts Box Office at (936) 468-6407 or visit www.finearts.sfasu.edu.