Uber makes its Nacogdoches debut Wednesday on the SFA campus 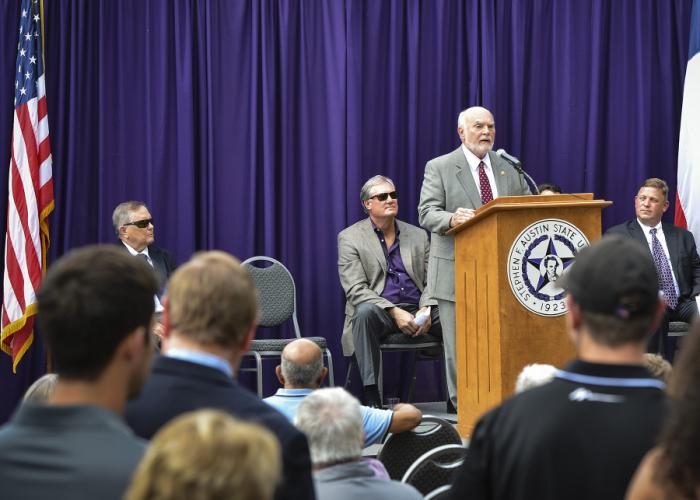 Sen. Robert Nichols spoke Wednesday afternoon during the Nacogdoches debut of Uber, a national ride-hailing company common in larger cities, which took place on the Stephen F. Austin State University campus. Nichols and other government and campus officials spoke of their excitement to have the company offer services and employment to students and community members. Seated on the stage, from left, are SFA President Dr. Baker Pattillo, Rep. Travis Clardy, and Dr. Adam Peck, SFA dean of Student Affairs. Chris Miller, Texas public policy manager for Uber, is seated behind the podium. 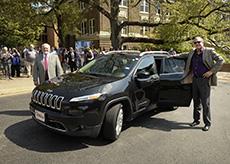 Sen. Robert Nichols, left, and Rep. Travis Clardy were the first to hail an Uber in Nacogdoches Wednesday following the company’s debut on the SFA campus.

State representatives and SFA officials shared their excitement about the economic boost and personal services the company will provide Nacogdoches residents and SFA students.

“Today is an exciting day for Stephen F. Austin State University as well as the city and county of Nacogdoches,” Sen. Robert Nichols told the crowd gathered under the trees of the SFA Baker Pattillo Student Center plaza. “I want to thank Uber for coming to Texas, for investing in Texas and bringing their business model to our state. It’s a very valuable service that is going to provide jobs to young people as well as middle-aged and older individuals. It’s a service that’s greatly needed, particularly in a college town.”

Dr. Baker Pattillo, university president, as well as campus and government officials spoke during this event.

“I am looking forward to Uber providing jobs for our SFA students,” Pattillo said. “I think it’s a great opportunity for our students to have a part-time job and to set their own hours.”

Rep. Travis Clardy also spoke Wednesday of his excitement to have Uber in Nacogdoches and of Nichols’ work and his own assistance in the passage of House Bill 100, which created statewide regulations that enabled ride-hailing companies to offer services in Texas cities.

“Senator Nichols is exactly right — this is great for our students and for student employment, but it really does affect another significant population in our city,” Clardy said, “and that’s our elderly. It will help them become re-engaged in our community. This is something good for us all, the young and old, visitors and residents in Nacogdoches.”

“Any time Uber comes into a city, what we like to do is look to start a strong partnership, and we believe we started a strong partnership here today with Stephen F. Austin State University,” Miller said. “Senator Nichols has been working on this [legislative] issue for more than four years, and it’s not hyperbole to say without his help this session, HB 100 would not have passed, and we would not be here today.”

Uber officially began its services in Nacogdoches Wednesday afternoon. Clardy and Nichols were the first to hail an Uber when they ceremoniously entered a vehicle at the event’s close.

To use Uber, download the company’s app on Android or iPhone. A special promotion is being offered during the next few weeks. Local users may enter the promotional code “Nacogdoches” in their Uber app to receive a discount. First-time users will receive a free ride up to $15.