Vintage French WWI posters to be featured in exhibition 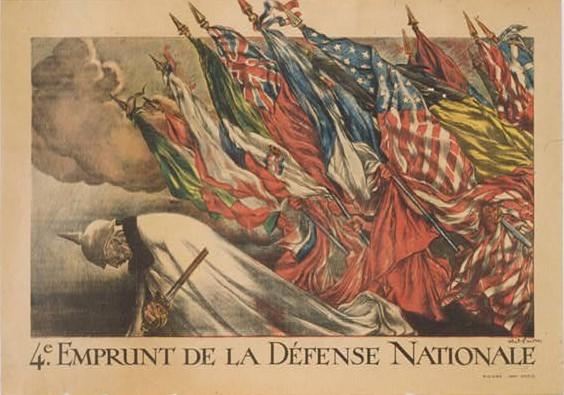 “The Patriotic Art of World War I in France” will be exhibited Oct. 31 through Dec. 30 in The Cole Art Center @ The Old Opera House.


NACOGDOCHES, Texas – The Stephen F. Austin State University School of Art and the SFA Galleries will host the exhibition “The Patriotic Art of World War I in France” Oct. 31 through Dec. 30 in The Cole Art Center @ The Old Opera House in downtown Nacogdoches.

The exhibition features French WWI posters from the extensive collection of Dr. Jere Jackson, Regent’s Professor of History at SFA and director of the Center for East Texas Studies. Topics of the lithographed posters made during WWI address issues concerning the war, and the exhibition includes some posters that focus on children during the war.

In “An Introduction to the Patriotic School of Paris: French Poster Artists of the Great War,” Jackson writes: “It is difficult, even after 100 years, to comprehend the magnitude and the importance of the First World War. It was the Great War of 1914-1918, and not World War II, that presaged the grim horrors which we now associate with the 20th Century wars: machine guns, trenches, tanks, chemical weapons and gas masks, aerial warfare, civilian bombardment, submarine attacks, starvation blockades, concentration camps, atrocities, deportations, vicious propaganda attacks, etc. Yet, on the eve of this war, almost no one foresaw the terrible path that coming events would take.

“Everyone expected the war to be over ‘before the leaves fall’ or ‘by Christmas,’” he continues. “In military matters, for this reason, everyone worshiped the offensive. In non-military matters, on the other hand, most governments including the French believed only in the defensive. The French had the best censor in the world! The government controlled the posting of bills, the flow of paper to the major presses, and the major channels of distribution. Had the war been short as anticipated, victory might have made any positive methods of propaganda unnecessary. After the stalemate in the fall of 1914, however, the new war of wills necessitated the encouragement of morale, patriotism, sacrifice, conservation of resources, and duty; in short, a complete mobilization of French society and resources. Since radio and television were yet to be invented, the main tools available were the products of the printing press – newspapers, magazines, reviews, journals, leaflets, postcards, and most importantly posters. The French Government, however, did not come to a positive use of these potential weapons until very late. Outside the press organs it controlled, the official attitude toward the press and artists was antagonistic.”

The exhibition was planned to coincide with next year’s 100th anniversary of the end of WWI.

Jackson will speak at a reception at 3 p.m. Saturday, Nov. 11, Veteran’s Day. Coffee and cake will be served. The event is sponsored by SFA Friends of the Visual Arts, the Nacogdoches Junior Forum and The Flower Shop. Admission is free. The annual Downtown Art Walk takes place that evening.