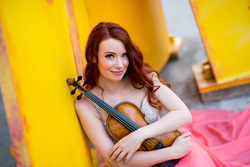 Trevor, who has appeared as a soloist with orchestras worldwide, including the Hong Kong Sinfonietta, Latvian Chamber Orchestra, Slovak State Philharmonic, Plano Symphony and the Knoxville Symphony, will be joined by pianist Jonathan Tsay. She made her New York concerto debut in 2013 and Avery Fisher Hall debut in 2014.

She went on to perform Tchaikovsky's Violin Concerto with the Houston Symphony and recitals at the Music in the Mountains Festival with pianist David Korevaar.

The 2017 distinguished panel of adjudicators for Saturday night's final round of the Schmidbauer Competition include Trevor, conductor Richard Lee of the East Texas Symphony Orchestra and pianist James Cho.

The recital is free and open to the public. For more information about the Schmidbauer Competition, contact Moon at (936) 468-3885 or moongh@sfasu.edu or visit www.schmidbauercompetition.org.