Cole Art Center to exhibit ‘Kymia Nawabi: Not for Long, My Forlorn’ 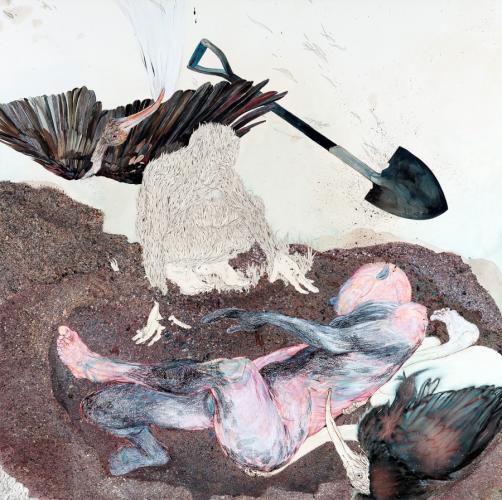 An exhibition of works by artist Kymia Nawabi will be exhibited Oct. 25 through Dec. 30 in the Ledbetter Gallery of The Cole Art Center @ The Old Opera House in downtown Nacogdoches.


NACOGDOCHES, Texas – The School of Art at Stephen F. Austin State University and its art galleries will present an exhibition of works by artist Kymia Nawabi Oct. 25 through Dec. 30 in the Ledbetter Gallery of The Cole Art Center @ The Old Opera House in downtown Nacogdoches.

“Kymia Nawabi: Not for Long, My Forlorn” features a series of large-scale drawings that “acted as meditations on life and death channeled through ravenous, otherworldly beings and animals that inhabit a purgatory-like space,” according to the artist. An exhibition reception is scheduled for 6 to 8 p.m. Thursday, Nov. 29.

Wesley Berg, assistant professor of art at SFA, studied with Nawabi when they were graduate students at the University of Florida.

“I first met Kymia at the University of Florida where we both pursued graduate degrees in painting and drawing,” Berg said. “At UF, we had the privilege of studying under the great Arnold Mesches, who imparted to us his knowledge of line and gesture. Arnold quickly noticed, and championed, Kymia's skill and affinity for line work.

“Kymia translates her personal mythology through a language of specificity – an ethos of mark-making,” he said. “Her work maintains its boldness while sharing a vulnerability with the viewer. It speaks to our togetherness, our isolation and our collective need for the tactile – the touch of a hand.”

Of the individual piece titled “Not for Long, My Forlorn,” Nawabi writes, “Here, we are introduced to the Egyptian god, Thoth. Thoth was believed to be half man, half an ibis bird. Thoth is a god of many things, but most importantly he is who holds the universe in balance and who greets you in the afterlife. In, ‘Not For Long, My Forlorn,’ there is a buried man who has gone back into the earth. This soul has taken form above as blades of grass that have momentarily taken human shape. This possessed patch of earth has dug up itself in both senses – the earth has undone itself, as well as this former being excavating himself.

“As we look closer, Thoth appears in an embrace in the grave, in tears and in all its wonder. The title, ‘Not For Long, My Forlorn,’ is what I hear Thoth communicating to the grass figure … that it will not be long before you are to go on with the next life, and this mourning will pass. I love the use of ‘forlorn’ here because it suggests the most sad and alone state one can be in, and in this case, one's death. But for another to speak to you and console you in such a state reminds us we are never alone.”

Recipient of the New York Foundation for the Arts Grant and Fellowship in Drawing in 2017, Nawabi has exhibited her work widely in both group and solo exhibitions. This particular exhibition has been shown at The Greenville Museum of Art, Greenville, North Carolina, and The Brooklyn Museum, Brooklyn, New York.

Nawabi earned first prize on season two of Bravo’s “Work of Art: The Next Great Artist,” taking home $100,000 and earning a solo exhibition at the Brooklyn Museum. On the final episode of “Work of Art,” she organized her works for this exhibition.

She is represented by Abmeyer and Wood in Seattle, Washington.

Admission to the exhibition and reception, which is sponsored in part by the Friends of the Visual Arts, Nacogdoches Junior Forum, William Arscott and The Flower Shop, is free. For more information, call (936) 468-1131.