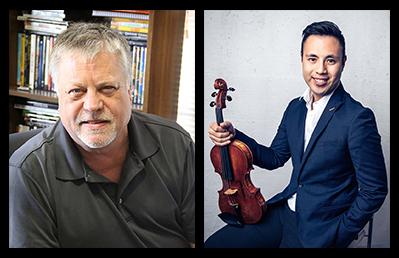 
NACOGDOCHES, Texas – Fans of music made popular over the past 70 years won’t want to miss the fourth installment of the concert series “Broadway, Movies and Classics” presented by Stephen F. Austin State University’s Orchestra of the Pines at 7:30 p.m. Monday, March 5, in W.M. Turner Auditorium on the SFA campus.

The program will take audiences through generations of music with the tunes of popular artists such as Journey, Led Zeppelin, The Beatles, Paul Simon and much more, according to Dr. Gene H. Moon, director of orchestras at SFA and of the Orchestra of the Pines.

Special guest and emcee for the night is Brad Maule, acting/directing and filmmaking instructor at SFA known for his long-standing role as Dr. Tony Jones on the TV serial “General Hospital.” Guest performer will be violinist John Ma, orchestra director at the University of Macau. Six student members of the Macau university orchestra will also perform.

“We have very special guests flying from halfway around the world to join us,” Moon said. “SFA has relationships with several universities in Hong Kong and Macau. Last year, 12 SFA students took the journey across the Pacific to collaborate in concert with the orchestra of the University of Macau. Now, six students from the University of Macau will make the journey to Nacogdoches and join the Orchestra of the Pines for our March 5 program.”

Ma will also join the orchestra in its performance of John Williams’ “Por Una Cabeza,” a tango for violin and orchestra popularized in many movies, but none so much as “Scent of a Woman,” Moon explained.

The concert will feature songs that every generation will recognize, Moon said.

“Nearly every piece will be very well known,” he said, “including ‘Bohemian Rhapsody,’ music from ‘Star Wars,’ and even a song from back in the ’60s known as ‘Pinball Wizard.’”

Other favorites will include “Eye of the Tiger,” “Mack the Knife,” “Moonlight Serenade” and “Danzon No 2” by Arturo Marquez, along with a tribute to the “king” of rock and roll, Elvis Presley, and music by Cole Porter.