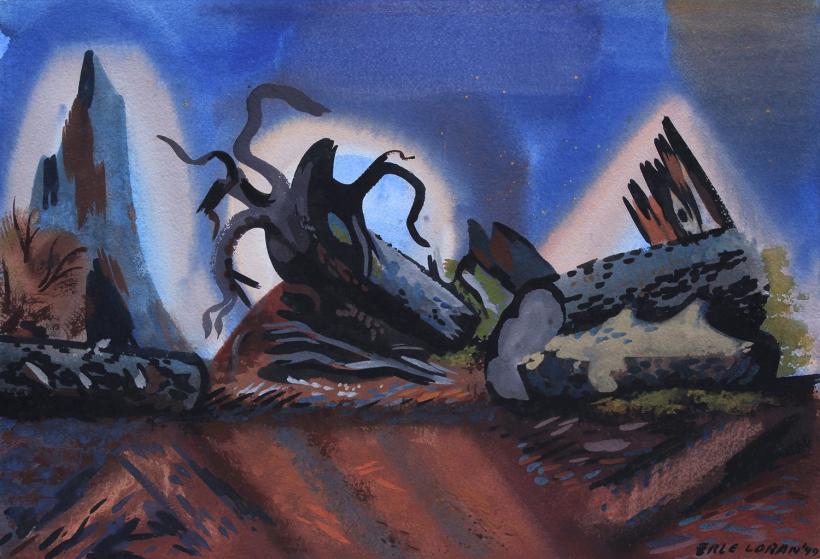 “Roots and Stumps,” a piece by California abstract expressionist artist Erle Loran, is among the works to be exhibited in “Erle Loran (1905-1999): A Modern Artist of the American West,” showing Jan. 18 through April 14 in the Griffith Fine Arts Gallery on the SFA campus.


NACOGDOCHES, Texas – An exhibition of works by Erle Loran will show from Jan. 18 through April 14 in the Griffith Fine Arts Gallery on the campus of Stephen F. Austin State University.

Loran (1905-1999) was a California abstract expressionist, painter, printmaker, author and teacher. “Erle Loran (1905-1999): A Modern Artist of the American West” will feature a retrospective of more than 60 works in diverse media, including oil paintings, watercolor, gouache, mixed media drawings and charcoal studies.

“These works show the changing styles that the artist explored over a period of some 60 years,” said Dr. David Lewis, professor of art history in the SFA School of Art and curator of the exhibition. “Styles range form Regionalism of the WPA era, semi-abstract landscapes, abstract expressionism, to what might best be called abstract impressionism as well as abstract formalism. Whatever style he worked in, Loran always maintained a high level of sophistication and craftsmanship.”

Loran was a key figure in the so-called “Berkeley School” of modernism in the Bay Area of California, which thrived during the late 1930s through the 1950s. Under Loran’s leadership as chair in the early and mid 1950s, the Art Department at Berkeley rapidly gained recognition and was ranked among the top three art schools in the country by the College Art Association.

The inspiration for the Griffith Gallery show came after Lewis saw an exhibition of WPA era art at the Smithsonian Museum of American Art in Washington, D.C. At the time, Lewis knew Loran as the author of a famous book, “Cézanne’s Composition,” which was first published in 1943, and remained in print for over 60 years. Lewis had not known of his work as an artist before seeing a landscape in that exhibition.

“I soon began researching his work and life, and the more I looked at his life and work, the more intrigued I became,” he said. “I was surprised to learn that he had won numerous honors and distinctions as an exhibiting artist, and that he had played an instrumental role in negotiating a gift of some 45 paintings by Hans Hofmann for the University of California’s permanent art collection – the largest collection of its kind anywhere.”

Lewis explains that Hofmann was a key figure in the Abstract Expressionist movement and is generally acknowledge as the single most influential art teacher of the 20th century. The UC-Berkeley faculty adopted many of Hofmann’s ideas in developing its curriculum during the 1930s and 1940s.

“Of course, I was also taken by the consistent quality of Loran’s work,” Lewis said, “and I also enjoyed the way he used disguised symbolism, sometimes inspired by the petroglyphic art of ancient Native American cultures of the Southwest and later from designs found in Northwest Coast totem poles and Haida artifacts.”

Beginning in the 1930s and continuing through the 1960s, Loran exhibited in most of the major national competitions and invitational shows of his day, including The Whitney Annual (several times), the Carnegie Annual, The San Paolo International (three times), as well as other major exhibitions held at the Chicago Art Institute, The Metropolitan Museum of Art and Museum of Modern Art in New York, The San Francisco Museum of Modern Art, the M.H. de Young Museum in San Francisco, among others.

A gallery talk will take place starting at 5 p.m. Thursday, Feb. 1, in the gallery, with Lewis discussing Loran’s artwork at about 5:30 p.m. Admission is free.

The exhibition also features a few example of work by Loran’s fellow UC-Berkeley artist John Charles Haley, who is considered the “founder” of the “Berkeley School.”

Gallery talks and receptions are sponsored in part by the SFA Friends of the Visual Arts, Nacogdoches Junior Forum and The Flower Shop.