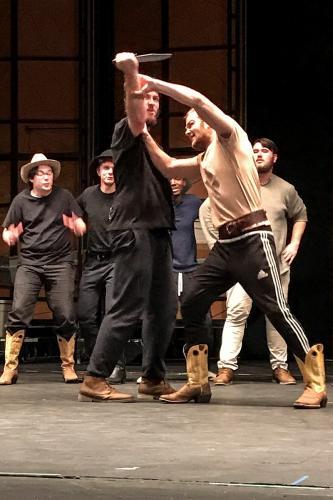 
NACOGDOCHES, Texas – Richard Rodgers and Oscar Hammerstein II’s “Oklahoma!” is known as the breakthrough musical of its time with songs like “Oklahoma!” and “Oh What a Beautiful Mornin’” that have withstood time in popularity.

Set in Oklahoma Territory at the turn of the 20th century, it tells the story of farm girl Laurey Williams and her courtship by two rival suitors, cowboy Curly McLain and farmhand Jud Fry. Between the story, the memorable music, the elaborate dancing and fight scenes that define “Oklahoma!,” the show has something for every audience member, according to Angela Bacarisse, professor of theatre at Stephen F. Austin State University and director of the show for the School of Theatre’s Mainstage Series.

A collaborative production between the university’s School of Theatre, School of Music and the Dance Program, “Oklahoma!” will seamlessly and artistically come to life nightly on W.M. Turner Stage Nov. 6 through 10. But the preparation behind the scenes, specifically fast-paced fight scenes and sweet love scenes, comes from a careful concentration on timing and technique. Slade Billew, assistant professor of acting and movement, is working with students on scenes that involve violence and intimacy.

“There are some big fights, mostly fist, in the play, but the weapons that are used must be very carefully choreographed so that no one gets injured,” explained Bacarisse. “And, you cannot imagine how awkward it can be the first time a young actor is asked to kiss someone who is, in truth, a stranger. There is a skill and a way of setting up those scenes that keeps it professional and relieves some of the tension. There are a lot of ‘young loves’ in this show who will be working on this aspect of the craft of acting.”

Fight choreography starts with discussions between the choreographer and the director about the style of the show and how the fights should feel to the audience, Billew said. Fight scenes in some shows will seem like real violence, while those scenes in others, like “Oklahoma!,” are more stylized, he explained.

“I like to create choreography in collaboration with the actors, so that I can better adapt to their abilities,” Billew said. “We build each fight using a combination of the actors' understanding of their characters and my knowledge of both actual fighting and stage combat technique.”

Fight-scene safety is all about precision and control of distance, Billew said. The actors must do the moves the same way every time.

SFA theatre students who take movement courses learn unarmed and rapier/dagger fighting for the stage. In rehearsals, students learn the specific fights they are performing. For “Oklahoma!,” that included various punches, kicks and grappling maneuvers, depending on the fight. There are also some knife-fighting scenes and the use of some prop firearms, Billew said.

“Students who perform in these fights or use these prop weapons learn a variety of details of handling them for both safety and the illusion of reality,” he said “Also, in working on ‘Oklahoma!,’ we have used a heightened style that looks a bit more like the fights in a western movie from the 1950s as opposed to a more contemporary martial arts based style.”

Lastly, stage fights are performed a little slower than a real fight would happen. This is not necessarily for safety, but rather because faster movement makes it more difficult for the audience to follow the action, Billew explained.

At the other end of the spectrum are the love scenes in “Oklahoma!” Choreographing intimacy is a relatively new process in the theatre, said Billew, adding that he has only been working in this arena for the last few years since first encountering the work of Tonia Sina and her organization Intimacy Directors International.

“Stage intimacy, as I have learned to approach it, has five key elements: context, communication, consent, choreography and closure,” Billew said. “Culturally, theatre artists of all kinds often feel uncomfortable even talking about, much less staging, moments of physical intimacy. This has often led to unsafe practices of various kinds. Many of these issues have been brought forward in the past few years.

“Choreographing intimacy is about creating a rehearsal environment around intimate scenes that encourages open communication among the creative team,” he said. “We choreograph the intimate moments so that everyone feels safe and has consented to the staging. This makes the actors better able to commit to playing the moment because they know what is going to happen and are comfortable with it.”

Lastly, it can be difficult for any actor, but especially student actors to separate personal feelings from character feelings, Billew said. The closure process gives actors a way to remind themselves that their relationship to their scene partner is professional, and they are more easily able to keep their personal daily life separate from the character life they are exploring on stage, he explained.

For “Oklahoma,” choreography was used to both nuance and heighten moments, Billew said.

“Intimacy choreography allows us to explore details of intimate moments that we do instinctually in daily life, but that often gets left out on stage,” he said. “Something as seemingly simple as the hugs between Laurey and Curly are choreographed as a series of ‘moments’ rather than just a hug.”

Similar to the fights, the romance in “Oklahoma!” is bigger than is normally found in life.

“Oklahoma!” will be presented at 7:30 p.m. Tuesday through Saturday, Nov. 6 through 10, in W.M. Turner Auditorium in the Griffith Fine Arts Building, 2222 Alumni Drive, on the SFA campus.