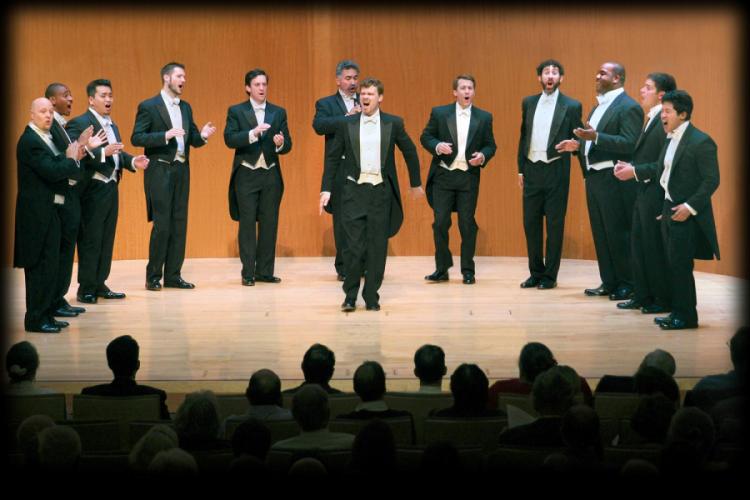 The Grammy Award-winning Chanticleer a cappella choir will perform at 7:30 p.m. Friday, Jan. 19, in W.M. Turner Auditorium on the SFA campus.


NACOGDOCHES, Texas – Brisk ticket sales to the University Series performance of the Grammy Award-winning men’s chorus Chanticleer at Stephen F. Austin State University may be reflective of the wide fan base the popular a cappella choir enjoys worldwide.

The SFA College of Fine Arts will present Chanticleer performing the program “Heart of a Soldier” at 7:30 p.m. Friday, Jan. 19, in W.M. Turner Auditorium on the SFA campus.

Known around the globe as “an orchestra of voices,” the San Francisco-based ensemble is famous for the seamless blend of its 12 male voices, ranging from soprano to bass, and its original interpretations of songs, from Renaissance to jazz and from gospel to pop, according to Scott Shattuck, associate dean of the College of Fine Arts and director of the University Series.

Local fans are eagerly anticipating the performance, and one of those is John Handley, director of SFA Art Galleries.

“I learned about the group when I was living in the Bay Area,” Handley said. “I purchased a couple of their CDs, one of which was a Christmas album. I have never seen a live performance, so I am very eager to experience their music ‘first hand.’

“When people think of a cappella singing (no musical instruments), one is tempted to think of so-called ‘barbershop’ music,” Handley added. “Chanticleer is nothing of the sort; the singing is so melodious that you can easily forget that there is no musical accompaniment.”

Called “the world’s reigning male chorus” by the New Yorker magazine, Chanticleer will celebrate its 40th anniversary in 2018. During its 2017-18 season. Chanticleer will perform 52 concerts in 23 of the United States, 27 in the San Francisco Bay Area, and eight in Poland, Germany, France and Spain.

Dr. Michael Murphy, director of choral activities for the SFA School of Music, has been a Chanticleer fan for many years.

“I have been a Chanticleer fan as long as I can remember – definitely since my years as an undergraduate student in North Carolina,” Murphy said. “I have been inspired by Chanticleer concerts many times, most recently in 2012.”

Their music will appeal to a wide audience, according to both Handley and Murphy.

“I think this performance is ideal for families,” Handley said. “People of all ages will enjoy it.”

“The appeal to me is that they sing a wide array of choral music exquisitely,” Murphy said. “The commitment and professionalism to the choral craft and the skill level and sincerity in which they perform are the reasons I attribute to their success as world-class artists since 1978.”

Murphy said he was excited to learn that the program features music that focuses on the universal theme of a soldier’s heart.

“From the serene, but elegant setting of ‘O Pray for the Peace of Jerusalem’ of Welsh-born, English Renaissance master Thomas Tomkins, to the rousing and toe-tapping 1957 hit ‘Boogie Woogie Bugle Boy’ by The Andrews Sisters, there is something for everyone to enjoy and relate to,” Murphy said.

“I am excited for our community to witness this world-class vocal ensemble that is certainly a cultural gem in our American music scene,” he added.

Prior to the performance, Murphy will present an informative talk at 7 p.m. in Griffith Gallery. The gallery is located across the hall from Turner Auditorium, which is inside the Griffith Fine Arts Building, 2222 Alumni Drive.

The Nacogdoches performance is sponsored in part by BancorpSouth.