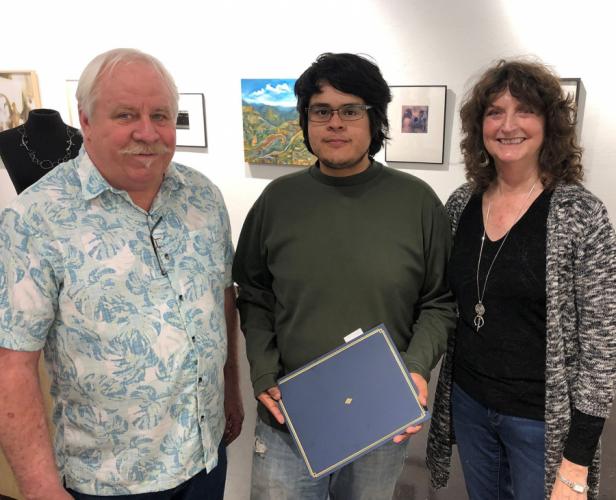 
NACOGDOCHES, Texas – The Friends of the Visual Arts at Stephen F. Austin State University have selected Aldo Ornelas, a graduate student in ceramics from Chihuahua City, Mexico, as this year’s recipient of the Gary Q. Frields Art Scholarship.

To be eligible for the Frields’ award, students must “demonstrate an exemplary work ethic, show versatility in the use of media and techniques in two or more areas, and show innovation and quality in their work,” according to the criteria established by Frields.

Piero Fenci, professor of ceramics at SFA, nominated Ornelas for the award that honors the late SFA art professor. Fenci noted, “Aldo is a workhorse and has made himself indispensable in the ceramic studio. He’s devoted, trustworthy, sweet, thoughtful and steady.”

Ornelas’ other concentration is sculpture, and his work in both areas is strong, ranging from functional pottery and decorative vessels to figurative and abstract sculpture and ranging in size from intimate to life size, Fenci wrote.

“He virtually lives in the studio and is always the first to volunteer to lend a hand,” Fenci said.

Ornelas graduated from La Universidad Autonoma de Chihuahua, the state university in Mexico with which SFA has a special art relationship.  Ornelas is the fifth Mexican undergraduate to matriculate in SFA’s M.F.A. program in the past dozen years, “and all of them have been over the top,” Fenci said.

The FVA established scholarships in the name of retiring SFA School of Art professors who were employed in the School of Art for minimum of 10 years before retirement and who contributed in a significant way to the mission of the Friends of the Visual Arts board and its fundraising activities, such as by consistently donating art for fundraisers, by providing monetary assistance, or by serving on FVA committees or board.

Known among his peers as a great advocate for SFA’s art students, Frields taught courses in design, drawing and sculpture and served as graduate program coordinator for the School of Art before his retirement in 2012. He was a recipient of the SFA Fine Arts Teaching Excellence Award and was appointed to the board of directors for the Texas Association of Schools of Art. Frields’ involvement in national juried exhibitions helped in establishing the SFA Texas National, originating the concept, name and designing the logo. The event brings to Nacogdoches some of the most celebrated contemporary artists as jurors. He originated the Art Prom and was a founding member of The Cole Art Center @ The Old Opera House, creating the logo and contributing to concept planning.