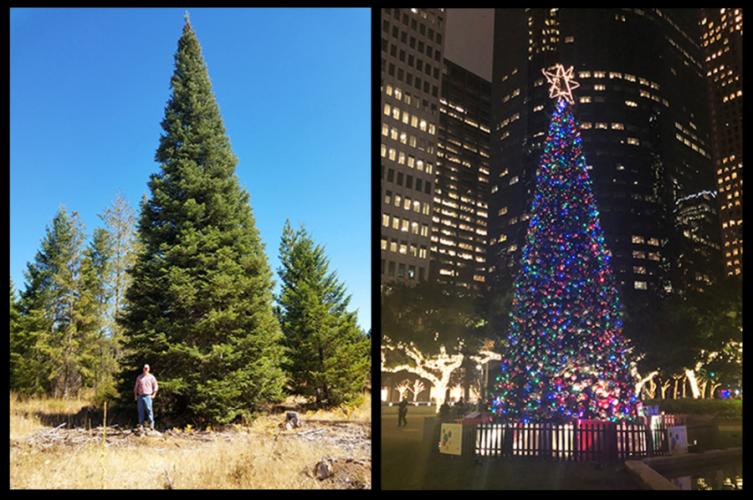 Stephen F. Austin State University forestry alumnus David Robinson had the honor of selecting the official Christmas tree for the City of Houston. The tree, a 65-foot white fir harvested from private timberland near Medford, Oregon, was lit during Houston’s 99th annual Mayor’s Holiday Celebration and Tree-Lighting Ceremony at City Hall on Dec. 3. Pictured, Robinson, field supervisor of urban forestry for the City of Houston, stands with the tree prior to felling.

“It was an honor, and I hope I get to do it again,” said Robinson, field supervisor of urban forestry for the City of Houston. “I got to see a part of the country I’ve never seen before, and it’s just amazing.”

The tree, harvested from private timberland near Medford, Oregon, is one of many large conifers from the region that will be transported across the country and displayed in large city centers.

Robinson said the City of Houston has a relationship with an individual based in the Pacific Northwest who collaborates with industrial timber companies and private landowners to locate potential large-scale Christmas trees.

“The trees are marked with GPS coordinates, and he returns during the next five to six years to fertilize and shape the tree,” Robinson said. “Once ready, the trees are marketed to cities like Houston, shopping malls or anyone in the market for a big Christmas tree.”

While much of the initial correspondence regarding desired tree specifications, such as height, is conducted through phone or email, Robinson said it is necessary to see the tree in person to make the final decision.

“We check things that don’t translate well through email and pictures, such as tree quality and different kinds of potential hazards,” Robinson said.

Following final selection, the tree is felled and transported via helicopter from the forest to a landing site, where it is placed on a flatbed truck for transport.

Robinson explained that after it arrived in Houston, the tree was trimmed and placed in a 5-foot-deep culvert buried in the ground. Due to the sheer size of the tree, guide wires are used, and the culvert is filled with gravel to stabilize it.

“Despite the size, aftercare is not too dissimilar from the way in which families care for their own live Christmas trees at home,” Robinson said.

While aftercare may be similar, decorating a tree that size reaches a whole new level of Christmas spirit.

According to Stella Pereira, office manager for the Mayor’s Office of Special Events, more than 3,000 individual LED lights adorn the tree.

Although the final honor of lighting the tree went to Houston Mayor Sylvester Turner, Robinson said his own family has a tradition of selecting and decorating a tree to look forward to. He added his family’s Christmas tree will, of course, be a live tree.