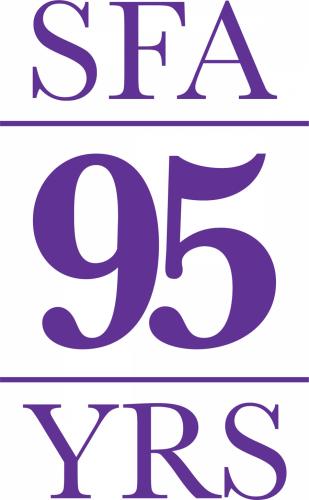 
NACOGDOCHES, Texas — Stephen F. Austin State University will celebrate its 95-year history at 11 a.m. Tuesday, Sept. 18, in the Baker Pattillo Student Center Plaza. The event will pay homage to a tradition that dates all the way back to SFA's opening day – birthday cake – along with a newer tradition: purple ice cream.

“At the end of the first day of classes 95 years ago, the faculty, staff and students enjoyed cake in celebration of the 50th birthday of SFA's first president, Dr. Alton W. Birdwell,” said Dr. Baker Pattillo, SFA president. “We are inviting members of the SFA and Nacogdoches communities to gather with us and commemorate this anniversary in the same manner.”

State Sen. Robert Nichols is expected to attend, along with other elected officials.

SFA’s History
In the opening years of the 20th century, local citizens set about convincing the Texas Legislature to open a state college in Nacogdoches.

Toward that end, the group created an illustrated pamphlet titled "Twenty-Three Reasons Why Stephen F. Austin State Normal College Ought to be Located in Nacogdoches." Among these revelations – the city offered a delightfully mild climate, cheap electricity and a good sewage system, rare natural beauty, a progressive business spirit, ample entertainment facilities, a high moral tone, and three two-story hotels. The 23rd reason given was that Nacogdoches "links old Texas with the new."

A prime example of this link on the campus today is the newly opened Ed and Gwen Cole STEM Building, a $46.4 million facility that supports the study of physics, engineering, astronomy and computer science, which sits next to the Stone Fort Museum, a replica of the house built by legendary Texas pioneer Gil Y’Barbo.

Nacogdoches was selected as the site of the newly chartered school in 1917, but progress was delayed by World War I. On Sept. 18, 1923, SFA welcomed its first students to class, and the rest, as they say, is history.

A Year of Celebration
The university's 95th anniversary will be celebrated throughout the coming academic year, and planning is underway for a variety of special events and activities, according to Jill Still, SFA vice president for university advancement and chair of the 95th anniversary planning committee.

"There will be many opportunities for students, alumni, faculty and staff, and friends of SFA to join in the celebrations surrounding this important milestone," Still said. "Our 95th anniversary year is an appropriate time to honor SFA's proud traditions and, as we look toward the celebration of our 100th anniversary, the new and exciting initiatives that will help ensure the continued success of our institution for many years to come."

Parking will be available for visitors in the Baker Pattillo Student Center parking garage.

In the event of rain, the ceremony will be held in the Twilight Ballroom.