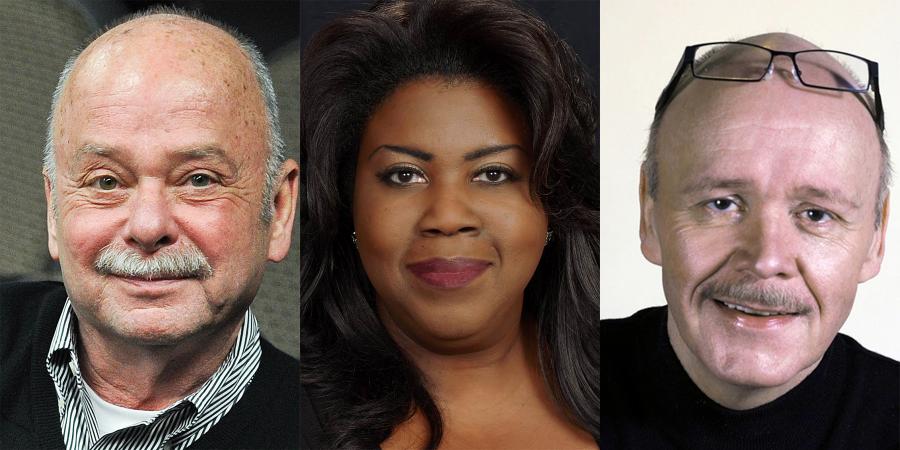 
NACOGDOCHES, Texas – East Texans can be among the first to hear the newest works by three acclaimed playwrights during the Stephen F. Austin State University School of Theatre’s 2018 Festival of New American Plays scheduled for Tuesday through Saturday, April 24 through 28, on the SFA campus.

This biennial event showcases the work of some of the best playwrights in the nation in a five-day festival during which each selected play is presented twice in staged readings by SFA theatre students, according to Jack Heifner, SFA School of Theatre’s playwright-in-residence, director of the festival and one of the featured authors.

“Since 1998, we have brought playwrights to our campus to see their new works,” Heifner said. “It’s a wonderful opportunity for our audiences to view ‘theatre in the making’ and for students to work with professional playwrights.”

This year’s festival features “Hot Flashes,” which is Heifner’s adaptation of the best selling novel by the same name by Barbara Raskin, along with “Sorry, Not Sorry” by S. Denise O’Neal and “… And the Pursuit of Happiness 1994” by Ted Swindley.

“New plays are the life force of the American theatre, and we are fortunate that our students get to work on plays written by extremely talented professional artists,” said Cleo House Jr., director of the SFA School of Theatre. “The School of Theatre is deeply enriched by having Playwright-in-Residence Jack Heifner on faculty each spring semester. He biennially coordinates the Festival of New American Plays, which is a point of pride for the School of Theatre. This event also further illustrates the kind of opportunities we create for our students that helps to bridge the gap between education and the professional world.”

Written in 1987, Raskin’s “Hot Flashes” was on the New York Times Best Seller list for 20 weeks.

“A producer approached me in 2013 to adapt the book for the stage,” Heifner said. “After I spent a lot of work on the project, the producer died, and I was left with a play without the rights and without being paid. But I wanted to, at the very least, hear the adaptation read.

“Last year, I approached the Raskin estate, and the family was wonderful about giving us the rights to do these readings in the festival,” he said. “I am a great admirer of Ms. Raskin’s work. The play examines women’s friendships and the secrets we sometimes keep from those who think they know us best.”

A celebrated novelist, Raskin also wrote "The National Anthem," an unflattering look at Washington during the Watergate investigations, "Loose Ends" and "Out of Order." She sold her first short story when she was 12 to Seventeen magazine. She graduated from high school at 16 and from the University of Minnesota two-and-a-half years later. While she was working on her master's degree in English from the University of Chicago, she worked part time as a flight attendant for Delta Airlines. She finished her first novel when she was 21 and moved to Washington. She taught at Georgetown University in Washington, wrote Senate speeches and diversified into journalism. Barbara Raskin died in 1999 at the age of 63.

In “Sorry, Not Sorry,” O’Neal has written six one-act plays, which are “urban, funny and touching,” Heifner said. “It will provide an interesting evening to watch actors play a variety of roles,” he added.

Swindley’s play “… And the Pursuit of Happiness 1994” is a comedy about a football player who decides to become a debutante.

“The play throws many of our ideas and prejudices up into the air as it explores gender roles, bigotry and talk show television,” Heifner said.

Heifner is the author of more than 30 plays and musicals produced in New York, Los Angeles and theaters around the world. He is best known for the play version of “Vanities,” which ran for five years in New York and became one of the longest-running plays in Off-Broadway history. His musicals include “Leader of the Pack” on Broadway and “Vanities - A New Musical” in New York and London. He has also worked in television and film.

Named a recipient of the Mary McCloud Bethune Award (National Council of Negro Women, 2015) and one of the "100 Creatives" of 2014 by the Houston Press, O'Neal has been a writer, director and producer for more than 20 years and has most recently become a published playwright. She is the executive director of Shabach Enterprise, a nonprofit theater company based in Houston, and the owner of Watch My Groove Enterprises LLC. Her most recent critically acclaimed productions include "Ms. Lily's Groove," "Just A Few Feet Away," “Bagel Anyone,” "Fly In The Windshield" (which was Broadway World's Editor's Pick for Best New Play of 2013) and "In One Breath."

In 2013, O’Neal founded the national play festival Fade To Black, which celebrates the new works of black playwrights. In 2014, she served as the assistant director for the Pulitzer Prize-winning production of Lynn Nottage’s "Ruined” in its Houston regional premiere. She directed the production of "Intimate Apparel," also written by Nottage, in 2015. She is a member of The Dramatists Guild and a former board member of Scriptwriters/Houston, and she is active in the Houston theatre community.

Swindley is internationally known as writer and director of the popular musical “Always…Patsy Cline.” He is the founding artistic director of Stages Rep in Houston. He was also named to the Esquire Magazine's register of outstanding Americans in Arts and Letters. Swindley was the recipient of the Los Angeles Dramalogue Award for outstanding direction of “Carnal Knowledge” by Jules Feiffer. He is president of Ted Swindley Productions Inc., a theatrical licensing and consulting company, and continues his 40-year career writing plays and musicals, consulting and mentoring playwrights, as well as directing plays and musicals for theaters throughout the U.S. and abroad. For more information, go to www.tedswindleyproductions.com.

All festival performances will be in the Downstage Theatre of the Griffith Fine Arts Building, 2222 Alumni Drive. For more information, visit theatre.sfasu.edu.