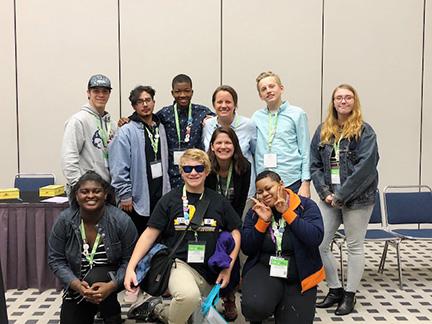 A group of Stephen F. Austin State University students and faculty members recently presented research at the National Council of Teachers of English Convention in Houston along with students from the Nacogdoches Independent School District. NISD students (pictured) presented on their experiences with Barrio Writers, a weeklong summer program offered at SFA that focuses on literature and creative writing.


NACOGDOCHES, Texas — A group of Stephen F. Austin State University students and faculty members recently presented research at the National Council of Teachers of English Convention in Houston along with students from the Nacogdoches Independent School District.

The group shared insight on a variety of topics while also networking with industry professionals. SFA faculty members within the James I. Perkins College of Education who attended the conference included Drs. Chrissy Cross, assistant professor of secondary education and educational leadership; Heather Olson Beal, associate professor of secondary education and educational leadership; and Lauren Burrow, associate professor of elementary education. The faculty members conducted a session on Barrio Writers, a weeklong summer program that empowers teens through creative writing and literature.

SFA has been offering Barrio Writers to the Nacogdoches community for four years, and many of this year’s Barrio Writers participants from NISD acted as co-presenters at the convention.

“This was a huge honor, as more than 6,000 people attended the convention,” Burrow said. “The theme of this year’s convention was Student Voice, so NCTE generously agreed to waive the conference attendance fee so our NISD students could present for free.”

During its session, the group hosted a smaller version of the Barrio Writers workshop where students performed spoken word poetry or read a poem, essay, open letter or short story.

“It’s hard for me to find the words to explain what happened during the presentation. The youth were amazing as they spoke powerfully about Barrio Writers, their creative writing and the community we have created with Barrio Writers,” Beal said. “They spoke about learning to use their voices — both in terms of speaking out about issues important to them and about using their writing abilities to advocate for themselves and others.”

Additionally, SFA students Jacqueline Jackson and Claire Rumsey presented a session on how teachers can promote diverse books in their classrooms and communities year-round.

The SFA Charter School also sent Nicole Burrow, a fourth-grade student, to the convention as a co-presenter for a poster session on Novel Engineering, a project blending literature and engineering.

For more information about SFA’s James I. Perkins College of Education, visit coe.sfasu.edu.