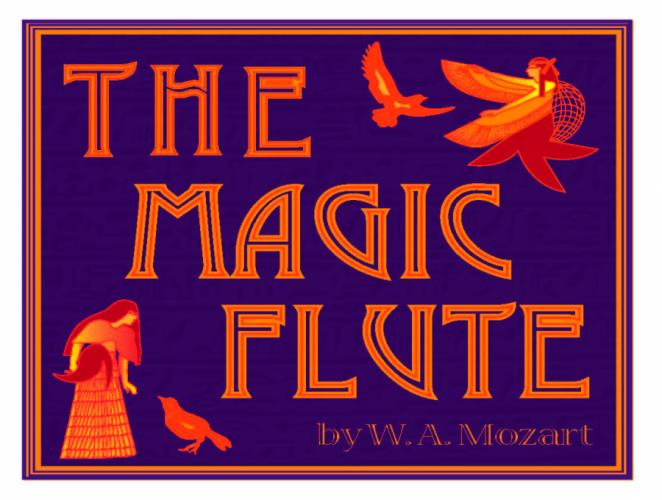 The Stephen F. Austin State University School of Music and School of Theatre will present W.A. Mozart’s “The Magic Flute” as this year’s SFA Opera Theater. Performances will begin at 7:30 p.m. Thursday through Saturday, April 12 through 14, in W.M. Turner Auditorium on the SFA campus.


NACOGDOCHES, Texas – A fairy tale for all ages is what the Stephen F. Austin State University School of Music and School of Theatre promise when they present W.A. Mozart’s “The Magic Flute” as this year’s SFA Opera Theater.

Taking the stage at 7:30 p.m. Thursday through Saturday, April 12 through 14, in W.M. Turner Auditorium, “The Magic Flute” is a perennial favorite for audiences and musicians alike, according to Dr. Deborah Dalton, associate professor of voice at SFA and stage director of the opera.

“In the 2015-16 season, there were more than 500 productions of ‘The Magic Flute’ worldwide, totaling more than 3,000 performances,” Dalton said. “The fairy tale story with prince and princess, magical creatures, and familiar themes of good versus evil appeals to all ages.

As Mozart’s final opera  – its premiere was two months prior to his death – the musical score is varied and beautiful, Dalton said.

“It requires virtuosic singing from the highest female voice (Queen of the Night) to the lowest male voice (Sarastro),” she said. “It has been on my wish list for many years, and we finally had the right combination of voices to mount a production.”

“The Magic Flute” is a Singspiele, a form of German light opera with both singing and spoken dialogue that was popular in the late 18th century, Dalton explained.

“It was written in collaboration with Emanuel Schikaneder for his theatre and is noted for its Masonic elements,” she said. “Both Mozart and Schikaneder were Freemasons.”

Scenic design for “The Magic Flute” is by theatre faculty member Kenneth Verdugo. The design is influenced by ancient Egypt and features temples, palm trees and rocky elements. A false proscenium frames the stage and highlights important elements of the story, Dalton explained.

Angela Bacarisse, professor of design and arts management in the School of Theatre, designed the costumes that Dalton described as a mix of fairy tale and “The Arabian Nights.”

“The large chorus posed a particular challenge: 28 to 30 identical costumes that will look good on everyone and fit our limited budget,” Dalton said. “Angela came up with a brilliant solution. I won’t give it away, but it is stunning!”

“This is truly a fun show for all ages that has something for everyone  – comedy, majesty and great beauty,” Dalton said. “SFA Opera Theater continues to feature beautiful voices accompanied by an SFA orchestra in the pit. This production, designed and built by the SFA School of Theatre, has Egyptian elements, a Queen of the Night (Superstition), the Temple of the Sun (Enlightenment), and a monster!”