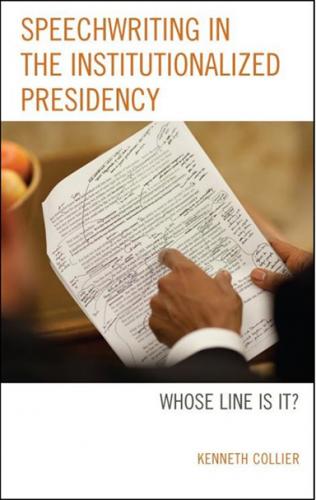 Ken Collier, Stephen F. Austin State University professor of political science, analyzes U.S. presidential speechwriting in his new book, “Speechwriting in the Institutionalized Presidency: Whose Line Is It?” slated for release on May 4.


NACOGDOCHES, Texas — The origins and sincerity of presidential speeches are the focus of a new book written by a Stephen F. Austin State University professor.

Ken Collier, SFA professor of political science, analyzes U.S. presidential speechwriting in his new book, “Speechwriting in the Institutionalized Presidency: Whose Line Is It?”

Collier studied major presidential speeches and their numerous drafts from Franklin D. Roosevelt through Barack Obama. Collier’s inspiration for this study stemmed from research he had completed on a previous project about White House relations to Congress. “I kept coming across drafts for speeches from past presidents, and seeing all the changes made to each speech piqued my interest.”

Most of Collier’s research was conducted while visiting each president’s public library and looking through countless documents regarding speeches. Collier received grants from SFA, the libraries and the White House Historical Association to conduct his research. He also went to Washington to meet with current and former speechwriters.

“It was incredible to see how much speeches were edited to death, because policy and political advisors often took a lot of fire out of each speech,” Collier said. “People have often wondered if the president’s words are genuine. Because we, the people, have a unique relationship with the president, we want to know if the words being said are sincere.”

Ultimately, Collier’s research shows that the institutionalization of the speechwriting process has actually served the presidency well by helping presidents avoid the pitfalls of poorly chosen words.

Collier’s research provides a unique perspective into the U.S. presidency, as Collier examined how presidents use their speeches to explain important policies and decisions. “Speechwriters don’t make decisions, but they work closely with the president and key advisors as they make decisions,” Collier said.

To pre-order Collier’s book, slated for release May 4, visit https://rowman.com/lexington.