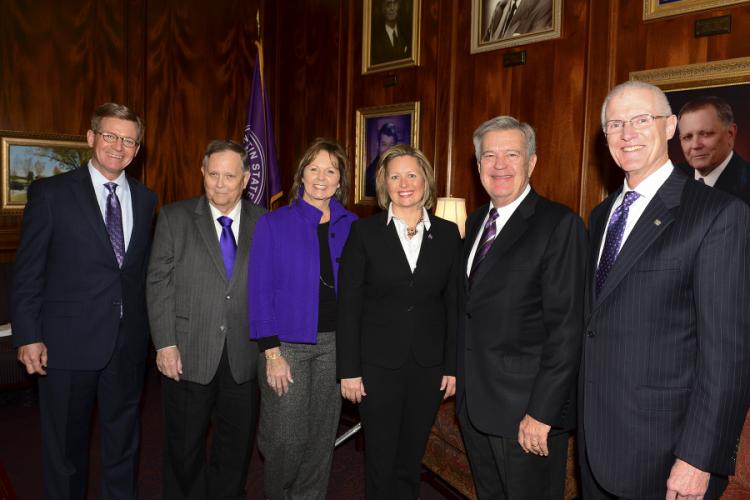 Tom Mason of Dallas and Karen Gantt of McKinney were appointed to six-year terms on the Stephen F. Austin State University Board of Regents by Gov. Greg Abbott. Regents Brigettee Henderson of Lufkin and Ken Schaefer of Brownsville were reappointed to SFA’s board. Pictured, from left, are David Alders, chair of the SFA Board of Regents; Dr. Baker Pattillo, university president; and regents Brigettee Henderson, Karen Gantt, Ken Schaefer and Tom Mason.


NACOGDOCHES, Texas — Two Stephen F. Austin State University alumni, Karen Gantt of McKinney and Tom Mason of Dallas, recently participated in their first official meetings as members of the SFA Board of Regents. Brigettee Henderson of Lufkin and Ken Schaefer of Brownsville, who recently completed six-year terms on the board, were reappointed by Gov. Greg Abbott to continue their service to the university.

Gantt is an attorney and partner at the law offices of McCraw Gantt. She is a member of the State Bar of Texas and the College of the State Bar of Texas, which recognizes lawyers, paralegals and judges who maintain and enhance their skills through significant voluntary participation in legal education. She is a former member of the SFA Alumni Foundation Board of Governors and a past president of SFA’s Alumni Association.

Mason serves as executive vice president and chief financial officer of Hillwood Development, one of the top industrial, commercial and residential real estate developers in the country. He served in the U.S. Army Reserves and received a Bachelor of Science in math and general business from SFA. He is a certified public accountant and serves on the board of the Caruth Village Homeowners Association and is an officer of the Land-Hyland Scholarship Fund.

While attending SFA, Mason was a member of Phi Delta Theta social fraternity, sophomore class vice president, chairman of Greek Week activities, and was elected to Who’s Who Among American Colleges and Universities.

Gantt, Henderson and Mason were appointed to six-year terms. In addition to her reappointment as an SFA regent, Henderson was elected by board members during their meeting to serve as chair of the board. Her term as chair will begin April 24, 2018.

Henderson holds bachelor’s degrees in interior design and communication from SFA and is an independent consulting interior designer and executive assistant at Carnes and Co. Auctioneers. She is secretary of the Angelina Arts Alliance Board of Directors, a member of the Buckner Family Place board of directors, Buckner Family Services Circle of Angels and Junior League of Lufkin Sustainers.

A past board member of the Lufkin Salvation Army, Museum of East Texas and Angelina Beautiful Clean, Henderson is a former chair of the American Cancer Society’s Cattle Baron’s Gala in Angelina County and is past president of the Junior League of Lufkin.

Reappointed to fill the term of the late Barry Nelson, who passed away in November 2016, Schaefer will serve on the board through 2019.

A 1970 graduate of SFA with a Bachelor of Business Administration in economics, Schaefer is owner and president of Schaefer Stevedoring Company, which provides shipping services within the maritime and port logistics industries of the U.S. and Mexico. He is director of the West Gulf Maritime Association and a past board member of the University of Texas Pan American, Texas Commerce Bank, Fondo de Inversion de Veracruz, and Almacenadora Regional del Golfo.

During his first term as regent, Schaefer served as vice chair of the board and as chair of the building and grounds committee and the finance and audit committee.

For more information about the SFA Board of Regents, visit www.sfasu.edu/regents.