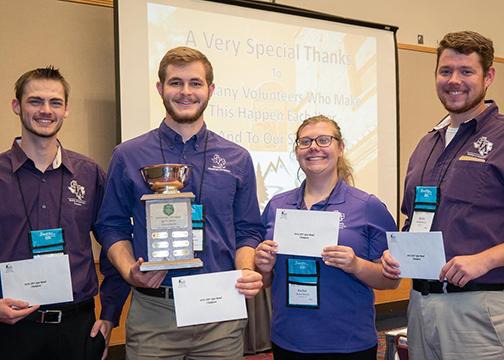 
NACOGDOCHES, Texas — For the first time in the chapter’s decades-long history, the Stephen F. Austin State University student chapter of the Society of American Foresters clinched the national title of Society of American Foresters Quiz Bowl Champions, defeating 32 collegiate teams from across the U.S. during this year’s national convention held in Portland, Oregon.

The competition, held annually at the SAF National Convention, is a quiz-based competition challenging student chapters to answer a broad range of technical and academic questions that span the discipline of forest resource management. Kidd said student chapters must sign up months in advance to be organized into a tournament bracket.

Christopher Longman, forest management senior and president of the SFA student chapter, said when forming a quiz bowl team, the chapter makes sure to include students from a range of forestry majors offered through the Arthur Temple College of Forestry and Agriculture.

“One of the questions we answered correctly was something we just learned in forest hydrology two weeks ago,” Longman said.

Although the team displayed a strong showing throughout the competition, besting universities such as Pennsylvania State University and the University of California at Berkley, Longman admits there were a few nerve-wracking moments.

“In our quarterfinal match, we went into overtime in sudden-death format,” Longman said. “That was probably the most nervous moment we experienced.”

Longman added that the team’s victory is a definite reflection on the quality academics offered at SFA.

To learn more about the majors offered through SFA’s Arthur Temple College of Forestry and Agriculture, visit atcofa.sfasu.edu.