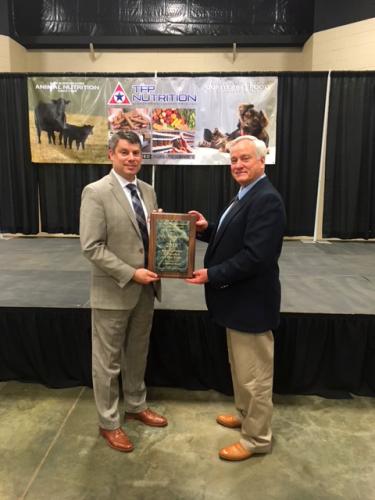 
When it comes to modern agricultural mechanics, Dr. Craig H. Morton, professor of agriculture at Stephen F. Austin State University, either wrote the book or contributed heavily to its content and development. The curriculum vitae of the 2018 Nacogdoches County Agriculture Educator of the Year is packed with the titles of agriculture technology textbooks of which he is either the author or a major contributor. He authored “Welding for Modern Agriculture,” the definitive text on that subject, and contributed numerous chapters to “Agricultural Technical Systems and Mechanics,” the primary text for high school agricultural mechanics programs nationwide.

That same résumé is filled with dozens of examples of commitment and service to his students in SFA’s agricultural engineering technology program and to FFA members across the state and nation who compete in career development contests. Morton also served his country for three decades as an officer in the United States Army and the National Guard and Reserve. During his deployments in the Army Reserve, he served the people of Afghanistan through consulting projects aimed at developing the nation’s agricultural economy.

Morton grew up in Nacogdoches and came by his lifelong love of agricultural engineering and tinkering honestly. His father, Paul Morton, was a master electrician at NIBCO, and his mother, Erline, worked as a florist at The Flower Shop. Both were natives of Melrose. As an agriculture student at Nacogdoches High School in the late 1960s, Morton raised Yorkshire hogs, laying hens, cattle and hay on his family’s farm in Melrose. He credits his high school agriculture instructors, Nolan Alders and Clois Walker, for helping make the NHS agriculture department one of the nation’s top-tier vocational agriculture programs and for inspiring him to embark on a career in agricultural education.

After graduating from NHS in 1969, he enrolled at SFA and earned a degree in agricultural education. As an undergraduate, Morton was a member of the ROTC and worked as a projector operator at the SFA and Main theatres. Morton then earned a master’s degree in agriculture education from Texas A&M.

Commissioned as a second lieutenant upon his graduation from SFA, Morton joined the United States Army Infantry after earning his master’s degree and was deployed to Germany twice during the next three years. While back in the United States in 1977, Morton was introduced to Diane Nance on a blind date in Fort Worth, and they married in 1978. Today, Diane works as a speech therapist at Nacogdoches ISD.

After leaving active duty in the Army, Craig worked as a county extension agent in Houston County until 1980, when he decided to pursue a doctoral degree in agricultural education with an emphasis in agriculture engineering at the University of Missouri. From 1982 to 1988, Morton held the post of assistant professor in the agriculture department at Southwest Missouri State University in Springfield.

In 1988, Morton returned to Nacogdoches to serve as assistant professor in SFA’s Military Science Department and the ROTC, a position he held through 1991. During that year, he declined an opportunity to move to Washington, D.C., for a job in the Pentagon and instead accepted a position as visiting assistant professor of agriculture mechanics at Southwest Texas State University in San Marcos. A year later he returned to the piney woods of East Texas where he taught geography and physical science at Diboll High School. In 1993, he accepted an offer to teach science and physical education at the Nacogdoches Boys Ranch, part of Woden ISD. From 1997 through 1998, he was deployed to Bosnia and served as liaison officer for all Army Reserve troops in that theater of operations. Upon returning to the United States in 1998, he applied for teaching positions at Tarleton State University and at SFA and was offered positions at both universities. He accepted the position at SFA and has directed the agricultural engineering technology program for the past two decades.

Craig and his wife have two daughters, Mandy Morton and Amie Morton Ford, and two sons, Justin and Jacob. As of May, the six members of the Morton family will have earned 15 college degrees. Mandy works as assistant district attorney in Waller County, and Amie is the scholarship coordinator for the SFA Alumni Association. Each one has earned two degrees from SFA. In May, Justin will earn his Ph.D. in philosophy from the University of Texas, where his younger brother, Jacob, is a junior majoring in government. Justin also works in the field of artificial intelligence for Cycorp Inc., an Austin high technology firm.

During his distinguished teaching career, Dr. Morton has earned the respect of both his peers and students.

“The students taking his courses love his teaching style and the time he devotes to their learning,” said Dr. Joey Bray, chair of the SFA Department of Agriculture.

The Agriculture Educator of the Year award is sponsored by Citizens 1st Bank.