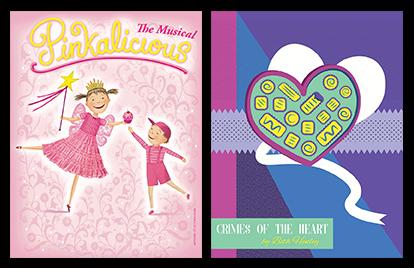 In less than a week, the SummerStage Festival at Stephen F. Austin State University will open for its three-week run of the two featured plays, – the family friendly “Pinkalicious the Musical” and the Pulitzer Prize-winning “Crimes of the Heart.” The festival runs June 29 through July 19.


NACOGDOCHES, Texas – In less than a week, the SummerStage Festival at Stephen F. Austin State University will open for its three-week run of presenting a fun and heartwarming children’s musical and an emotionally powerful American play for the 2018 summer theatre season.

The SummerStage Festival runs June 29 through July 19. Ticket sales are brisk for the two featured plays, – the family friendly “Pinkalicious the Musical” and the Pulitzer Prize-winning “Crimes of the Heart.” Both shows will make wonderful outings for those hoping to escape the summer doldrums and enjoy quality entertainment, according to Cleo House Jr., director of the SFA School of Theatre and of “Pinkalicious.”

“SummerStage is as much for the Nacogdoches community as it is for SFA,” House said. “You may have seen us at the Blueberry Festival painting faces, or dressed up as characters from your favorite cartoon movies. Maybe you saw us at the local library reading books to kids. You might have heard about us on Red River Radio or learned about us from a poster in one of the local businesses. We’ve even scheduled one ‘pay-what-you-can’ performance for each show. All of this reveals that SummerStage is community driven – which, in turn, says SummerStage is all about the people of Nacogdoches.”

House continues by acknowledging that the SummerStage Festival is sponsored in part by Tipton Ford Lincoln. “We want to thank our corporate partner, Tipton Ford Lincoln, for their generous and annual partnership with our children’s show each summer.”

“Pinkalicious the Musical” with book by Elizabeth Kann and Victoria Kann, music by John Gregor, and lyrics by John Gregor, Elizabeth Kann and Victoria Kann, is the story of Pinkalicious, a little girl who can't stop eating pink cupcakes despite warnings from her parents. Her pink indulgence lands her at the doctor's office with Pinkititis, an affliction that turns her pink from head to toe – a dream come true for this pink-loving enthusiast. But when her hue goes too far, only Pinkalicious can figure out a way to get out of this predicament.

“‘Crimes of the Heart’ is ultimately a play about the bonds of family and about love,” Meier said. “The smaller theatre, and way we’ve arranged seating, allow the audience to feel as though they are a direct part of the experience.”

Set in 1974, the play has the Magrath sisters still coping with their father’s abandonment and mother’s suicide that occurred more than a decade earlier, the devastation of Hurricane Camille five years earlier and the Watergate scandal that unfolded only months before the start of the play’s storyline.

“The traumas and crises faced by the sisters are thus not all that different from those confronting the country today,” Meier wrote in her program notes. “Our news may come from the internet rather than newspapers, but we are not unfamiliar with headlines informing us of suicides, hurricanes and Constitutional crises. The events leave their mark on the sisters in different ways and fracture their familial bond. When the play begins, they are faced with yet another crisis, causing the sisters to circle the wagons and find their way back to one another.

“It is said that history repeats, first as tragedy, then as comedy,” she said. “For the sisters, who have witnessed so much tragedy, the comedy offers both a reprieve and a path forward, blending laughter and tears into a story of resilience we can all learn from.”

With “Crimes of the Heart” addressing domestic violence, pedophilia and suicide, a “talkback session” with Jill Milem, director of SFA’s Counseling Services, will follow the play’s July 7 performance.