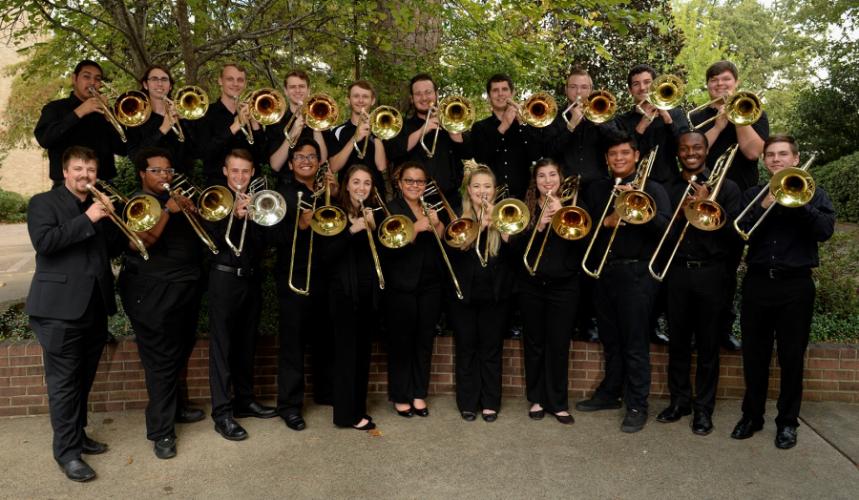 SFA’s Trombone Choir will celebrate International Trombone Week with a concert at 7:30 p.m. Tuesday, April 10, in Cole Concert Hall on the SFA campus.

The performance is part of International Trombone Week in which musicians around the globe celebrate the trombone. Marking its 16th year, International Trombone Week features thousands of trombonists creating and participating in grassroots events and performances all over the world, according to Scott, professor of trombone in the SFA School of Music.

Dr. Danny Chapa, instructor of low brass at SFA, will conduct the choir in its performance of “6 Pieces for 4 Trombones” by Vaclav Nelhybel and “O’er the Deep Blue Sea” by Garry Wickliffe, who is a former SFA composition student of Dr. Stephen Lias, professor of composition.

“This piece was originally composed for the SFA Trombone Choir years ago,” Chapa said. “It is now published by Brassworks 4 Publishing Company.”

Scott will conduct the choir in Two Orchestral Fanfares arranged by David Mathie. The works in this selection include “Fanfare pour preceder ‘La Peri’" by Paul Dukas and “Fanfare to Act III, 'Le Martyre de Saint Sebastien’" by Claude Debussy.

“‘Buonasera Trombone’ is composed in a fun Latin style that will include several other musicians helping out by clapping their parts,” Scott said. “It will close out the program.”