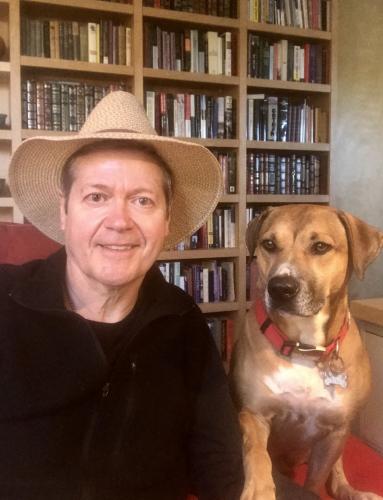 Jerry Permenter and his sidekick, Muriel


NACOGDOCHES, Texas – The Stephen F. Austin State University School of Art and SFA Galleries will present “Red Dirt Memories: Storytelling with Jerry Permenter” Saturday and Sunday, May 5 and 6, at The Cole Art Center @ The Old Opera House in downtown Nacogdoches.

A native of the Swift community in Nacogdoches County, Permenter, who goes by the name Red DirtBoy on Facebook, grew up in rural East Texas, and his memories of those early years laid the groundwork for what is now the Facebook page Red Dirt Memories, which has quickly garnered more than 5,000 followers.

Permenter will share some of his own “red dirt” memories in storytelling sessions at 2:30 p.m. Saturday and 1:30 p.m. Sunday. Admission is free, but seating in Cole Art Center is limited, according to Lisa Steed, events coordinator for SFA art galleries.

“Jerry’s written and spoken word stories have really created a large nostalgic community of people in a very short time period,” Steed said. “Older locals are particularly enchanted with these memories, but I think we’re all looking for relief from these troubled times and want to feel a connection to our roots.”

“His memories are obviously his own, but I’ve found many of the stories have a southern commonality that seems like he lived down the road from me,” Steed said.  “I wanted to ask: are we related?”

Many East Texans will remember that Permenter was the founder and executive director of the East Texas AIDS Project based in Nacogdoches in the late 80's in Nacogdoches until 1994. The project later became Health Horizons.

“Red Dirt Boy” is the name Permenter had given last year to a book in progress.

“I grew up in Nacogdoches, and I have a memory on every corner of those red brick streets,” he said. “I've been a technical writer for over 30 years; creative writing was a hobby. ‘Red Dirt Boy’ came about after I lost two siblings and my mom in recent years, and I began to write under that name about some of our experiences growing up.

“The audience for those writings developed organically – usually by word of mouth or through a few websites,” he said. “The reaction to them was so strong that I began to write new ones on a regular basis.”

He now has a collection of stories based on growing up in Nacogdoches County that will be released later this year as "Red Dirt Memories."

Permenter initially began sharing his memories with his two grandchildren so they would know and understand their family history.

“What began with me sharing my own childhood memories – growing up, the struggles and the good memories – seemed to resonate with so many others that local folks began sharing their stories and photos with me,” he said. “That was probably my greatest motivation after I started. Many families had events in their lives that helped shape them, made them stronger and more resilient, but those stories were kept within the family.”

“I discovered a commonality we all shared, along with a desire to tell our stories, to share experiences and create community,” he said.

The closed group site generated almost 2,000 members in a brief six-week period. Members can share their family stories and photos, allowing all to see stories and photos of the rural life many experienced growing up.

After leaving the East Texas AIDS Project, Permenter was the executive director of the Alamo Area Resource Center for 17 years. He then moved into consulting nationally. Permenter now splits his professional time between a home office in Santa Fe, New Mexico, and an office in downtown San Antonio. He provides program design, grant writing and evaluation for health and human services programs in both cities. He works with arts and eldercare organizations in Santa Fe while focusing on funding and evaluation of housing, clinical care and supportive services for San Antonio organizations. He has provided technical assistance for nonprofits for the U.S. Office of Minority Health and has overseen projects funded by the U.S. Health and Human Resources Administration. Recently, he founded a comprehensive Health Equity Clinic in San Antonio, which, as the first of its kind in South Texas, has been funded for the past three years by the Elton John AIDS Foundation.

“Red Dirt Boy” will eventually be an AIDS memoir when completed.

During the storytelling sessions, those in attendance will have the opportunity to share their memories and ask questions as time allows.

“I want these sessions to be casual and a shared experience, much like my social media pages Red Dirt Memories and Red DirtBoy have become,” Permenter said. “We have many things to discuss, and some wonderful folks who'll attend, with many great storytellers from the community in attendance. We'll close with questions and comments about all of our own ‘Red Dirt Memories.’

“I've been tremendously blessed by growing up in Nacogdoches and, in many ways, I hope to give back to my hometown at this stage of my life,” he added. “By offering readings, my writings and sharing our collective memories, I think many will enjoy the nostalgia of these stories and find it a great way to spend a weekend afternoon.”

Permenter describes storytelling as “a reciprocal exercise,” and he hopes these sessions will provide a time and place where folks can listen and relive some of their own years of growing up.

“There will be a lot of laughter and, again, a true sense of coming together to share stories in person – something we don’t do enough of in this day of technology overload,” he said. “‘Red Dirt Memories’ is a love letter to Nacogdoches in a very real sense, and my writings are a way of saying thank you to a hometown that helped in creating the man I am today.”