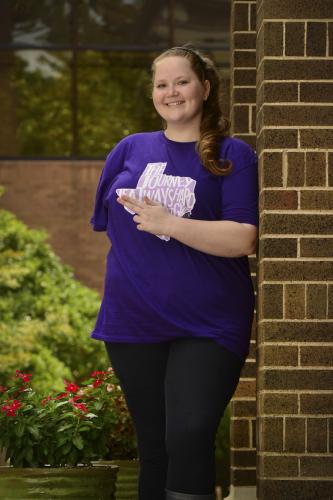 
NACOGDOCHES, Texas — Just one year and a day after the traumatic car accident that resulted in the amputation of Marissa Rotenberry’s right arm, she recently walked the stage at Johnson Coliseum and received her diploma for a master’s in statistics.

During her extended hospitalization following the accident, she had a singular focus pushing her through recovery – finishing her degree.

“It was very traumatic, but it didn’t change me,” Rotenberry said, “and it didn’t have to change my goals.”

Set to start her final semester of graduate school, her plans came to a temporary standstill on Aug. 10, 2017, when she was involved in the accident.

Sitting in the backseat with her arm near the window, Rotenberry took the brunt of the impact when the car crashed. Her arm was mangled by glass, and she sustained other severe injuries, including a lacerated liver, fractured discs and an internal chest degloving (an injury occurring when the skin separates from the muscle).

“I remember being in and out of consciousness,” she said. “I was never confused about what was going on, and I was very aware I had been in a bad car accident.”

Paramedics rushed Rotenberry to Nacogdoches Memorial Hospital and then transported her to Ben Taub Hospital in Houston, where doctors decided to amputate her arm. She remained there for 34 days.

With her extensive injuries, she took recovery one day at a time and celebrated every small victory.

“I remember the second day I was there, they had me sit up in a chair, and I got applauded,” she said.

Rotenberry went through occupational therapy and had three surgeries each week to tend to her wounds.

Less than three months after the accident, Rotenberry returned to school.

“I was only one semester away from graduation, so there was no doubt in my mind I wanted to finish it,” she said. “Grad school is hard work. It would essentially be throwing away the time I already put in, and that just seemed crazy.”

Because she started back in the middle of the semester, her professors customized the remaining part of her degree plan to give her time to study while focusing on healing. Working with Rotenberry was the department’s way of repaying her faith in the university, said Dr. Greg Miller, professor of statistics.

“She has entrusted all of her higher education to us, so we said, ‘What are we going to do about it? What’s the best way to chart a course for her?’” Miller said. “It was not an obligation but a real desire to do right by somebody.”

With the faculty’s help, Rotenberry planned on graduating in May until an infection required additional surgeries and pushed it back to August. Even after the set-back, she continued working toward graduation.

“After you teach for a while, you get good at recognizing talent, but the things you really can’t coach up in people are intangibles,” Miller said. “It’s the resilience. It’s the perseverance. It’s the stick-to-it, dedicated type of attitude that describes Marissa.”

While there have been many challenges on the road to recovery, the biggest change has mostly been mental, Rotenberry said.

“Sometimes it’s easy to forget because I still feel my hand,” she said. “Sometimes I feel like I want to grab things or use it. It’s just that adjustment, always.”

Whatever comes next, Rotenberry remains positive she can overcome any obstacles thrown her way.

“The bigger challenge would have been if I didn’t have any arms,” she said. “You can persevere, and you can keep going. It didn’t have to stop me.”