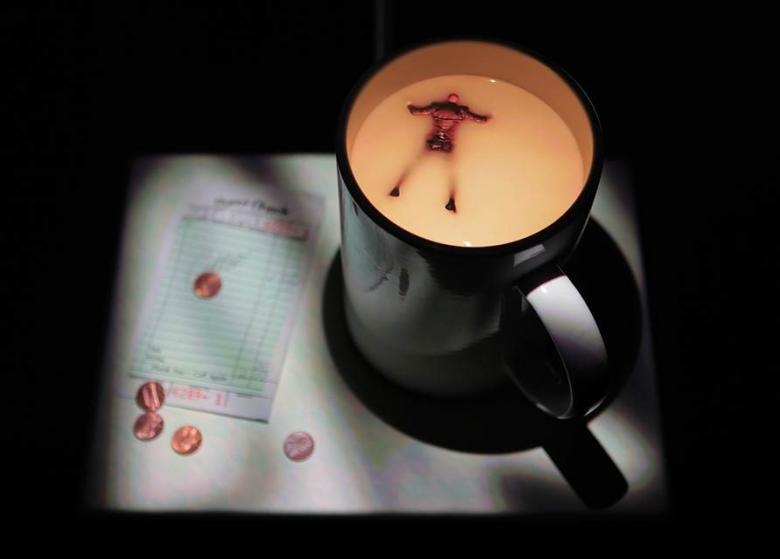 Video works of artist Sarkisian to be exhibited

"Cup 'a Joe" is among the works featured in "Peter Sarkisian: Video Works" showing Feb. 15 through April 21 in The Cole Art Center @ The Old Opera House in downtown Nacogdoches.

The exhibition, which features video projections on sculpture, will show through April 21 in Reavley Gallery. Sarkisian is an American new-media artist whose work combines video projection and sculpture to create a hybrid form of multi-media installation, according to John Handley, director of galleries for the SFA School of Art.

"I first saw Peter's work at the San Francisco Museum of Modern Art many years ago," Handley said. "I saw his work again at the Jordan Schnitzer Museum of Art in Oregon a few years back and contacted the artist after that."

Sarkisian's work is "grounded in the idea that video, in its ubiquitous and most popular form, is an experientially void medium, and that by depriving ourselves of experience in favor of information-based images, we have become unable to grasp the meaning of consequence or to coexist with mutual understanding," according to information on the artist's website: http://www.petersarkisian.com/.

His installations attempt to "steer the world's most influential medium back on a collision course with the viewer in order to reintroduce an element of experience to the viewing process."

"If the filmmaker's traditional goal is to distract viewers through the suspension of self-awareness, then Sarkisian's goal is to create a sense of heightened self-awareness by engaging the viewer in constructed environments that blur the line between what is real and what is mediated," the site says.

The underlying premise of his work remains committed to using video as an instrument against commercialized media, namely television, in order to transform the act of watching video from an experience-killing endeavor to an experience-creating one. He accomplishes this by joining sculptural elements with projected video imagery to create audio/visual illusions that trap the viewer between conflicting interpretations, thereby forcing a state of self-awareness that is otherwise absent while watching television.

Named a Master Video Artist in 2007 by the National Endowment for the Arts, Sarkisian has exhibited widely throughout the world in major museums and public venues, including the Whitney Museum of American Art, the Musée Picasso, France, the Hammer Museum of Art, the Albright-Knox Art Gallery and the San Francisco Museum of Modern Art. Sarkisian's work has been featured in many international exhibitions and festivals, including the Istanbul Biennial in Turkey, the Vidarte Festival in Mexico City, the Whitney Biennial in New York, and the Edinburgh Festival in Scotland.

Admission to all art exhibitions and receptions is free. The reception is sponsored in part by the SFA Friends of the Visual Arts, Nacogdoches Junior Forum and The Flower Shop.