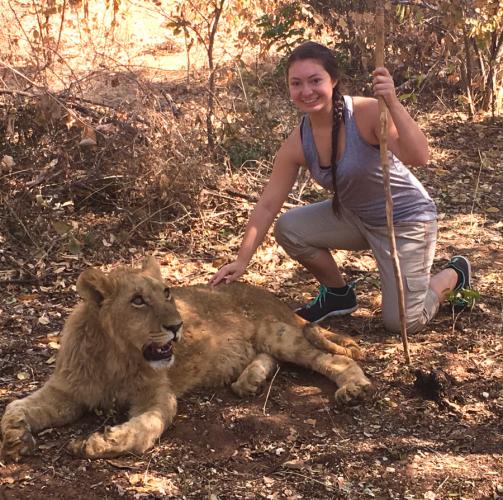 SFA student Krista Ward, a senior biology major from Jasper, spent two and a half weeks at Antelope Park in Zimbabwe conducting research with the volunteer organization African Impact. Ward assisted with a project measuring the effects of captivity on four lions kept on the property.


NACOGDOCHES, Texas — A Stephen F. Austin State University student’s desire to make a difference in animal conservation took her more than 8,000 miles from her hometown of Jasper to the bush of Zimbabwe, giving her the chance to walk with lions.

Krista Ward, a senior biology major and forestry minor, spent two and a half weeks in Antelope Park, a private game reserve set on 3,000 acres of savanna. Working with the volunteer organization African Impact in conjunction with the African Lion and Environmental Research Trust, she assisted with a project measuring the effects of captivity on four lions kept on the property.

Every other morning Ward would walk two lions at a time for an hour.

“It was really scary because they told us there were nine-month-old cubs, so I was thinking they were small,” she said. “They were huge, and there were four of them.”

Ward would flush the lions out of their enclosure by walking behind them, following them wherever they went on trails around the property. Because lions attack from behind, she made sure to keep them in front of her or to the side. When the lions lay down, she could safely crouch beside them and interact with them.

“The first time seeing lions was heart-stopping,” Ward said. “I felt really scared at first, but as I walked that went away.”

She and the other volunteers made toys for the cubs out of elephant poop, grass and sticks and took behavioral data that would later be compared to data from wild lions. Other days, they would go into the park and help on different projects, looking for elephants and giraffes and recording observational and behavioral data. They also toured a nearby village and interacted with the locals.

“They have a different way of life, and it was really interesting to see it because they do just fine,” Ward said. “They survive with what they have, and they make the most of it.”

When she decided to travel abroad, she went to SFA’s Office of International Programs for help. The office did not have a program in Africa, but the study abroad coordinator, Inés Maxit, was more than willing to assist her in finding the best options available. Ward researched programs online and brought her findings to Maxit, who reached out to other schools for feedback.

The office works closely with students through every step of the application process, making sure students have as seamless an experience as possible, Maxit said.

“I have met with many students after their study abroad experience, and I can see how they have grown,” she said. “It is no doubt a transformative experience.”

While Ward primarily took the trip to further her education, she was impacted in ways she didn’t expect.

“I have definitely changed because of this volunteer experience,” Ward said. “I was humbled by the cultural differences and other ways of life and respect other cultures in ways I didn’t before.”

Though traveling can be unsettling, she said, every moment of uncertainty was worth it.

“I hope anyone thinking about studying abroad would do it, because it was an amazing experience,” Ward said.