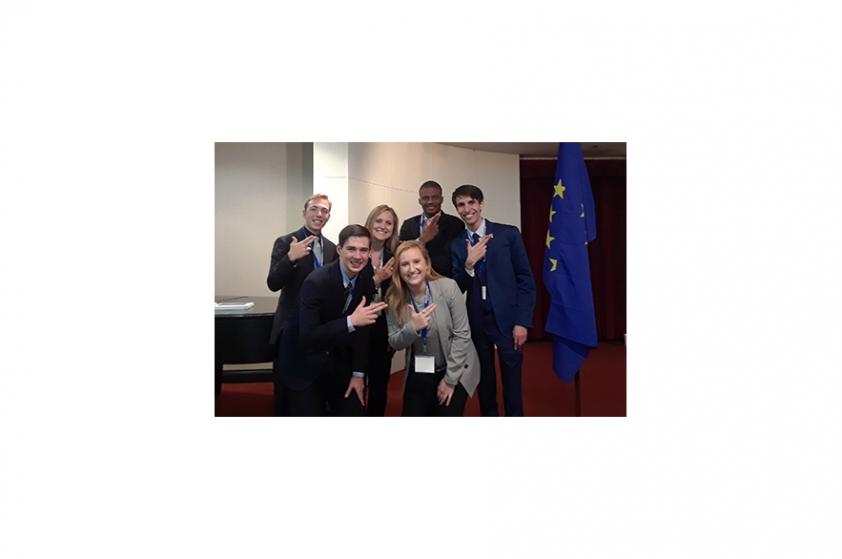 Among 21 teams, A team ties for fourth at Midwest Model European Competition

The SFA team competed at Indiana University against 21 other teams from schools such as the University of Illinois, Texas Woman’s University and Iowa State University. SFA’s team represented Estonia in the competition.

The MMEU competition is the second-oldest intercollegiate simulation of the European Union in North America. According to Dr. Steven Galatas, SFA associate professor of government and SFA Model EU faculty advisor, the competition allows students to immerse themselves in the policies and procedures of the EU.

“The purpose of MMEU is to provide a hands-on learning experience about how the European Union operates, to work with students from across the U.S. to debate and discuss issues related to the European Union, and to promote awareness and understanding of the union and its role in the world,” Galatas said.

“It was amazing to see our school, which was representing a tiny country, compete head-to-head with Big Ten Conference schools and other large universities,” said SFA student Morgan Moya of New Braunfels, who served as the environmental minister of Estonia.

In addition to tying for fourth place, three individual award winners from SFA included Aaron Kelley of Ennis, who received first place as the economics minister of Estonia; Moya, who won second place; and Daniel Greco of Katy, who placed third as minister in the foreign affairs council.

SFA students received their country assignment though a lottery system. The team met often during spring semester to discuss Estonia’s position on key issues facing the EU, such as Brexit, immigration and refugees, climate change, and more. Additionally, each member wrote a piece of legislation to submit for the competition.

“I prepared for this competition by investing a lot of time researching Estonia so that I could respond to unexpected situations,” Greco said. “I also spent time getting to know my team members so we could work well together and our team dynamic would be strong.”

The political science program within the Department of Government sponsors the team. Upon completing the European Union course in the fall, Galatas invited select students to join the team.

“The SFA Department of Government does a phenomenal job of preparing its students for events like this,” Moya said. “I had no experience with the European Union prior to this, but other classes I have taken at SFA helped me with background information regarding European politics, as well as parliamentary procedures that helped me during the competition.”

Students at other universities often participate in Model EU competitions as a requirement for a course, but volunteers comprised SFA’s team.

“Dr. Galatas’ class on the EU taught me a lot and showed me how interesting the EU can be,” Greco said. “But I chose to join the team because I wanted to well-represent SFA in an academic competition and demonstrate that SFA’s political science program can compete on a level with other universities.”