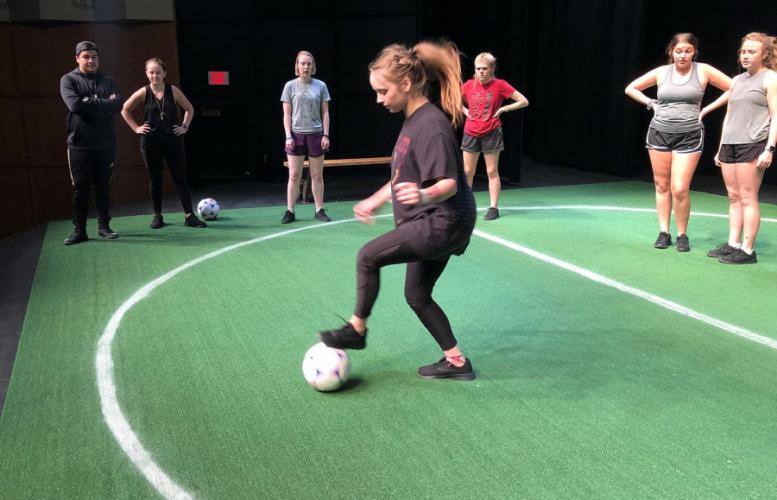 Directed by Professor Rick Jones, “The Wolves” follows the daily routines and conversations of nine girls on an elite-league soccer team. The high school-aged girls deal with the usual problems of growing up – forming relationships, struggling with adolescence and learning how to win and lose on the soccer field and in life. And while the student actors are telling a story on stage, they’re also playing soccer.

“No one in the cast is really a soccer player, and they’ve got to look like they’re playing at an elite level,” Jones said. “We don’t see them in a game situation, but the drills and exercises have got to look as if the girls are legitimate contenders for athletic scholarships at big-name universities.”

That’s where the soccer talents of Nunez and Smith come in to play. In addition to their stage management duties, the two are running practice drills that must convince the audience that the characters are legit soccer athletes.

Smith started playing soccer at a young age, playing at a high-skill level through middle school. For “The Wolves,” she has been helping cast members with ball control, “so we don’t have balls running off stage into the audience.”

Whereas the script doesn't call for an actual soccer game to happen on stage, the audience sees the pre-game warm-ups, including conditioning and passing drills, which Nunez and Smith have facilitated, teaching the actors how to pass and trap.

“We’re focusing on doing things that are simple to do but look more complicated than they actually are,” Smith said, adding that the cast first worked on making passes “look tight and clean,” adding lines later.

Nunez started playing soccer at age 3, playing either for a school soccer team or teams and clubs out of school. During off season, he played with friends at public fields. He spent four years playing indoor soccer, adding to the experience he brings for “The Wolves,” which is about indoor soccer.

“The rules are completely different for indoor soccer; they have the same basics, but there are different rules and speeds,” Nunez said

In addition to being a soccer consultant, Nunez believes his assistant stage manager’s responsibility includes that of safety officer, teaching soccer skills in a way so that cast members stay safe and won’t hurt themselves in the process.

“I like working with other people face to face, and building on something that was just an idea, turning it into something that people want to come see,” Nunez said.

During rehearsals, the assistant stage managers are also making sure the rehearsal space is set up and props are where they need to be. During the first days "off book," they're prompting the actors, taking notes on lines that are missed, and passing those notes on to the actors. During the run of the show, they're in charge of backstage with one on stage left and the other on stage right. They handle cues, such as a live whistle and a ball rolling across the stage. But their primary responsibility is to make sure everything is under control, to solve problems if they arise, and in this particular play, to make the soccer playing look real.

“Assistant stage managers are probably the most under-appreciated (by the public) people on a show,” Jones said.

But Smith doesn’t mind. Working toward a Bachelor of Fine Arts in stage management, Smith came to SFA from a small school where she “did everything” when it came to theater.

“I was stage manager, set designer, lighting designer and assistant director,” she said. “But I really like back stage in general as opposed to acting, mainly because I think it’s captivating that the audience has no idea, for the most part, what I’m doing to make the show happen.

“And I don’t mind not getting the credit,” she added. “I think that adds to the interest, because it’s the unknown … nobody knows how much you’re actually doing.”

“The Wolves” will be presented at 7:30 p.m. Tuesday through Saturday, Oct. 1 through 5, in W.M. Turner Auditorium on the SFA campus. Single tickets are $15 for adults, $10 for seniors and non-SFA students and $7.50 for youth. Tickets for SFA students are $5. For tickets or more information, call the SFA Fine Arts Box Office at (936) 468-6407 or visit www.theatre.sfasu.edu. The play is recommended for mature audiences.