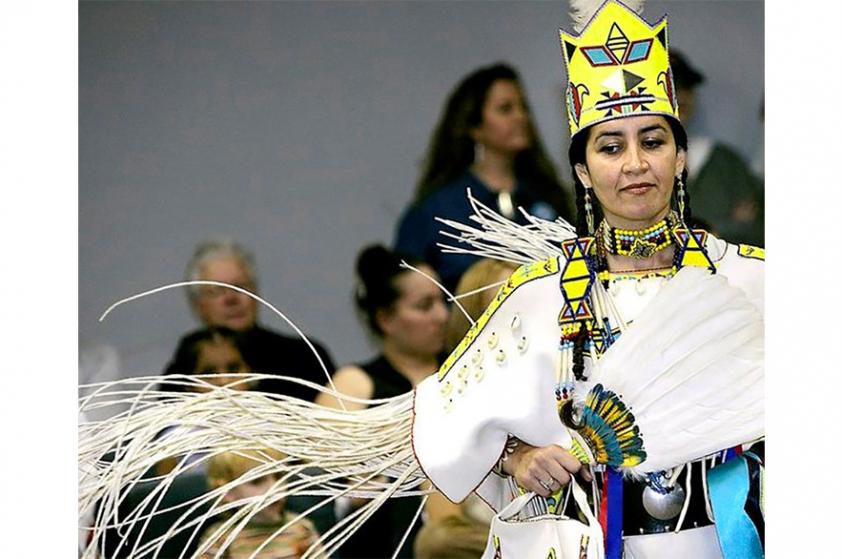 The program, which will include Caddo stories and children’s activities, is a continuation of the celebration surrounding “Caddo Contemporary: Present and Relevant,” an exhibition of ceramics, paintings, beadwork, stonework and drawings by seven living Caddo artists. The exhibition is a collaborative presentation of the Stephen F. Austin State University School of Art and Art Galleries and the Caddo Mounds State Historic Site in Alto.

Rhoads-Connywerdy is an enrolled member of the Caddo and Kiowa tribes of Oklahoma.  She has been telling Kiowa and Caddo stories in Oklahoma, across the United States and internationally for more than two decades.

Dancing in her traditional Caddo dress and Kiowa buckskin, Rhoads-Connywerdy toured extensively with the legendary Charles Chibitty, the last Comanche code talker, and was Gulhei descendent princess (family princess) for 1999-2000. She has won awards for her lead movie roles, which included “The Legend of Billy Fail,” “The Alamo,” “Chasing the Wind,” “Last of the Mohicans” and “UHF.”

She has an associate’s degree from Tulsa Community College and graduated from the University of Oklahoma with a bachelor’s degree in Native American studies. She is the former executive director of the Historic Jacobson House Native Art Center and currently works with the Kiowa Tribe of Oklahoma’s Kiowa Language and Culture Revitalization Program.

Additionally, for the monthly Friday Film Series, the SFA School of Art and Friends of the Visual Arts will present the documentary “Koo-Hoot Kiwat: The Caddo Grass House” in a free screening at 7 p.m. Friday, March 1, at Cole Art Center. In the film, a Caddo tribal elder and his apprentice return to their ancestral homeland in East Texas to direct the construction of a traditional grass house.

“Caddo Contemporary: Present and Relevant” is sponsored in part by William Arscott, The Flower Shop, Nacogdoches Junior Forum, Humanities Texas and Friends of the Visual Arts. Admission is free.