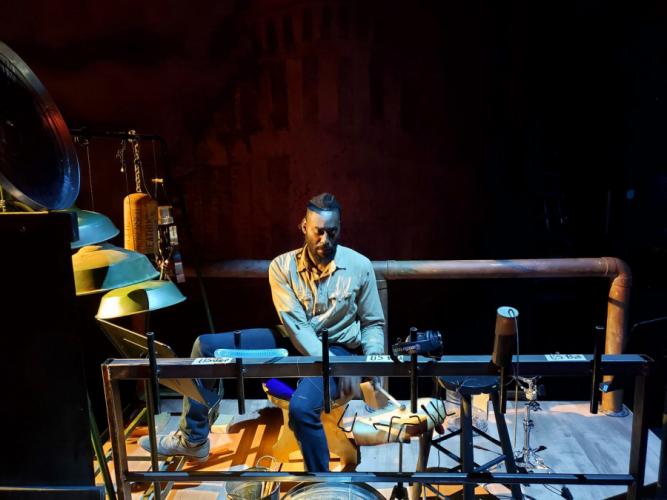 
NACOGDOCHES, Texas – The School of Theatre at Stephen F. Austin State University is keen on building collaborative artistic relationships across disciplines on campus and within the Nacogdoches community. A number of unique collaborations in the upcoming Mainstage Series presentation of William Shakespeare’s “Titus Andronicus” takes this theatre experience to a higher level, according to CC Conn, associate professor of lighting and sound design.

Among the strongest of these collaborations is with musician Casey Muze Williams of Starr Avenue Co. Williams is working with Conn, sound designer for “Titus,” along with the play’s assistant sound designer, Corpus Christi junior Armando Chavez-Garcia, and School of Theatre Technical Director Tyler Cureton to create the show’s sound accompaniment live, on stage with “found objects” rather than traditional instruments.

The sound design concept stems from show Director Cleo House Jr.’s concept of a post-apocalyptic world and his desire to incorporate an onstage musician. House is director of the School of Theatre. Because of the post-apocalyptic setting, Conn wanted to create a “found object” soundscape that could be indicative of a world where traditional musical instruments may no longer exist or be difficult to locate. As a result, this has given the production “a strong sense of collaborative creativity and exploration,” she said.

Williams and Conn have explored various sound qualities of these items to match them with the moods within the play. Chavez-Garcia and Cureton have created many of the objects which are part of the sound setup. There will be electronic sound playback and microphone support, as well.

“Our mission is to provide opportunities for individuals within a community to explore creativity and participate in educational opportunities that strengthen the positive relationships of the citizens within that community,” Williams explained. “We do this by providing opportunities for self-expression that include art, music and other creative avenues. We are founded on a strong belief that art, music and other creative expressions are some of the healthiest ways to advocate for positivity and acceptance among the citizens of each community.”

In another collaboration, Victoria sophomore Myah Mallory, sound engineer, will do a full accompaniment of microphones for the cast in order to support a clean, multi-camera recording of the opening-night performance to be provided by mass communication students of Dr. Casey Hart, associate professor of mass communication at SFA.

“Mallory will be prepping and operating a 20-mic show,” Conn said. “This is a complicated job for a sophomore-level student. However, Mallory was the sound engineer for an eight-mic play last summer. Live mics require a lot of preplanning in acquiring the supplies needed and setting up the sound equipment in the theatre. During the performances, Mallory will place the microphones on the actors and operate the mixing board to properly reinforce the actors’ voices over the music. She will also make a recording of the performance for the video production by the mass communications students.”

Mia Lindemann, a senior from Prosper, is providing lighting design for show. With a scheduled December graduation, it will be Lindemann’s final design at SFA. With Conn’s help, she acquired a loan of seven LED fixtures for demo purposes from Electronic Theatre Controls, a global leader in the manufacture of lighting and rigging technology. These fixtures will help to create the eerie atmospheres in the production along with fog and haze.

This adaptation of “Titus Andronicus” takes place in 2100 in Washington, D.C., in a post American-Russian (Roman-Goth) fallout. The play chronicles Rome’s honored general as he returns home from war and begins a cycle of revenge filled with bloody deaths as punishment for a series of committed wrongs.