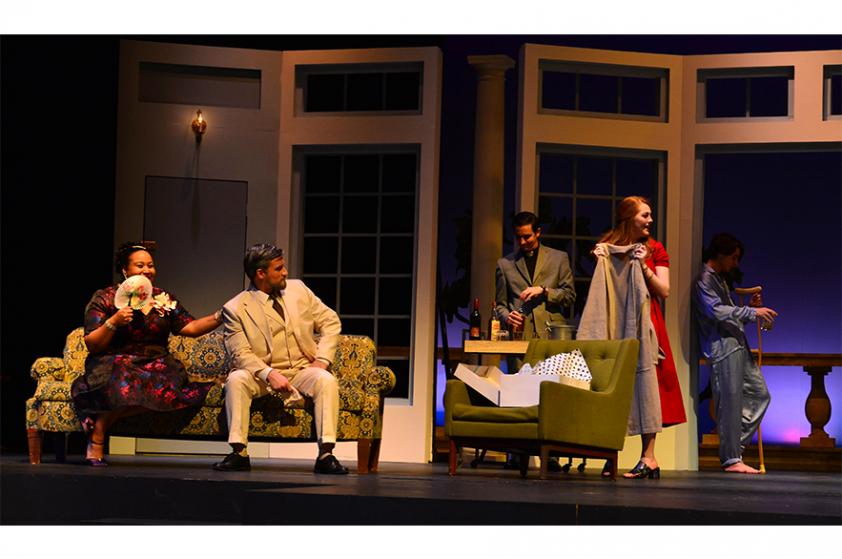 Among the cast members in the SFA School of Theatre’s presentation of Tennessee Williams’ “Cat on a Hot Tin Roof” are, from left, Tyler Junior Kiara Hawkins as Big Momma; Huffman sophomore Mike Warren as Big Daddy; Baytown junior Ryan Marshall as Reverend; Frisco senior Aubrey Moore as Maggie; and Waxahachie freshman Adam Lamb as Brick. The play is at 7:30 p.m. Tuesday through Saturday, April 30 through May 4, in Turner Auditorium in the Griffith Fine Arts Building.


NACOGDOCHES, Texas – The student actors SFA Playwright-in-Residence Jack Heifner selected to portray the colorful cast in his production of Tennessee Williams’ “Cat on a Hot Tin Roof” run the gamut in performance experience. Some have acted in many shows at Stephen F. Austin State University, while others are relative newcomers.

“They’ve worked hard to create an ensemble, and this is one of the best casts I’ve had here,” Heifner said. “They have created ‘a family.’ They act like a family on and off the stage.”

In addition to presenting a play that is engaging for the audience and fills W.M. Turner Auditorium, Heifner hopes “Cat on a Hot Tin Roof” teaches his students a great appreciation for its author.

“I want them to appreciate how wonderful a writer Tennessee Williams is,” he said. “I discovered his plays when I was a teenager, and I felt like a window had been opened to the world for me. He truly creates characters that are struggling with trying to connect and find some meaning in their lives.”

“Cat on a Hot Tin Roof” is about a southern family in crisis. Set in the plantation home in the Mississippi Delta of Big Daddy Pollitt, a wealthy cotton tycoon, the play examines the relationships among members of Big Daddy's family, primarily between his son Brick and “Maggie the Cat,” Brick's wife. Huffman sophomore Mike Warren plays Big Daddy in the play. As a veteran of the U.S. Air Force, Warren brings a different perspective to the stage.

“Big Daddy is a 65-year-old Mississippi plantation owner who has spent the last five years thinking he was dying of cancer,” Warren explains. “After a positive report from the doctor, he is looking at the world in a new light. My approach to this role was to try and understand real pain – the pain of the body and pain of betrayal by those around you, and to experience letting that pain go.

“Aside from the obvious of playing a 65-year-old dying man, the big challenge for me was playing this larger than life, dominating character with the rest of the cast being more experienced than myself,” he said. “I’m very new to acting, and it’s intimidating to work with people who have experience. Playing this character in that circumstance was difficult.”

Maggie is portrayed by Frisco senior Aubrey Moore, and her challenge in portraying “this feisty woman” was to “create a line to her emotions.”

“Maggie is an incredibly smart woman,” she said. “She can read other people like the back of her hand, and she isn’t afraid to let them know how she feels about them. Maggie is a bit of a wild card as well. Her temper can get the best of her, and her emotions can switch back and forth at a moment’s notice.”

At her core, Maggie wants her husband, Brick, to love her and for their future to be financially secure, Moore explains.

“Throughout the play, the audience can see her trying to achieve these goals with varying degrees of success,” she said. “Maggie goes on a huge journey through the play, and tracking how she feels and reacts to certain characters helped me discover who she really is. We talk in rehearsals about how each character is playing a game of sorts. For Maggie, she has a particular hand of cards, and if she can just play them right then maybe, just maybe, she will get what she wants.”

Reflecting Williams’ poetic writing style, Heifner said he is directing the play in a style that is sometimes called “poetic realism,” and he’s using notes from the original Broadway production.

“Williams called this ‘plastic theatre,’” Heifner said. “It is a method he and his director Elia Kazan employed to heighten awareness of certain events or characterizations. Plastic theatre is the use of props or staging or sound or lights or all of it to impress upon the audience more abstract ideas. It is often very blatant and seems unrealistic, but it adds to the drama of the scene.”

On its deepest level, Williams’ play is about the human condition, Moore said, and about how each individual deals with loss, death and longing. “Williams’ play shows that people are stronger together than apart,” she added. “These characters struggle to connect with one another, but if they can, they will all be better off for it. I hope when the audience sees the show, they realize this and make a conscious effort to be closer with their loved ones.”

Just directing a Tennessee Williams play is enough of a pleasure for a seasoned director like Heifner, not to mention seeing how this cast of student actors has put Williams’ poetry into motion on the stage.

“They are truly dedicated and are giving their very best,” Heifner. “We all realize we are doing a play by one of the greatest American playwrights, and it's an honor to be part of the process.”