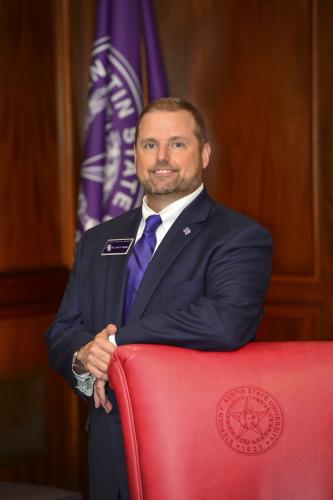 
NACOGDOCHES, Texas – The Stephen F. Austin State University Board of Regents unanimously confirmed Dr. Scott Gordon as the ninth president of the university during a specially called meeting today.

A native of Malone, New York, Gordon was a first-generation college student and received his bachelor’s degree in biology from the State University of New York at Cortland. He earned a master’s degree and doctorate in botany and mycology from the University of Tennessee in Knoxville and holds certifications from the Harvard University Graduate School of Education in educational management and leadership.

Gordon led a complete reorganization of EWU’s Academic Affairs unit, led the development and implementation of the university’s strategic plan in 2018 and developed partnerships with community colleges, business and industry, as well as government entities. This work was highlighted by a unique partnership with Microsoft and collaboration with multiple businesses on The Catalyst, a 140,000-square-foot facility in downtown Spokane.

Previously, Gordon spent 22 years at the University of Southern Indiana, where he served as dean of the Pott College of Science, Engineering and Education. In addition, Gordon served for 10 years as the Faculty Athletics Representative, was named a NCAA Faculty Athletic Representative Fellow, and was vice president and treasurer of the Great Lakes Valley Conference, which includes 14 NCAA Division II institutions.

Gordon succeeds Dr. Baker Pattillo, who was SFA president from 2006 until his death in December 2018. Dr. Steve Westbrook, SFA vice president for university affairs, served as interim president of the university.

Members of the SFA Board of Regents worked with an executive search firm, R. William Funk & Associates of Dallas, to solicit and review applications for the president’s position. Brigettee Henderson of Lufkin, chair of the board, said the pool of education leaders interested in SFA’s presidential post included many highly qualified candidates.

“Dr. Gordon has a track record of success in higher education, and with his energy, integrity and compassion, we look forward to the new ideas that he will bring as the next president of SFA,” Henderson said. “We believe he will be a thoughtful leader who will work tirelessly alongside faculty, staff, students and alumni, as well as the broader SFA community, to strengthen the university and ensure the brightest possible future as we embark on SFA’s second century of educational excellence, growth and innovation.”

While Gordon is expected to officially begin his duties at SFA on Sept. 16, he is scheduled to speak at a fall kick-off meeting for SFA faculty and staff at 8:30 a.m. Aug. 22. The meeting will be livestreamed, and a link to the broadcast will be accessible at sfasu.edu.

Gordon also is expected to speak on Friday, Aug. 23, at the Nacogdoches County Chamber of Commerce’s Fourth Friday Luncheon at The Fredonia Hotel and Convention Center. For ticket information, call (936) 560-5533.