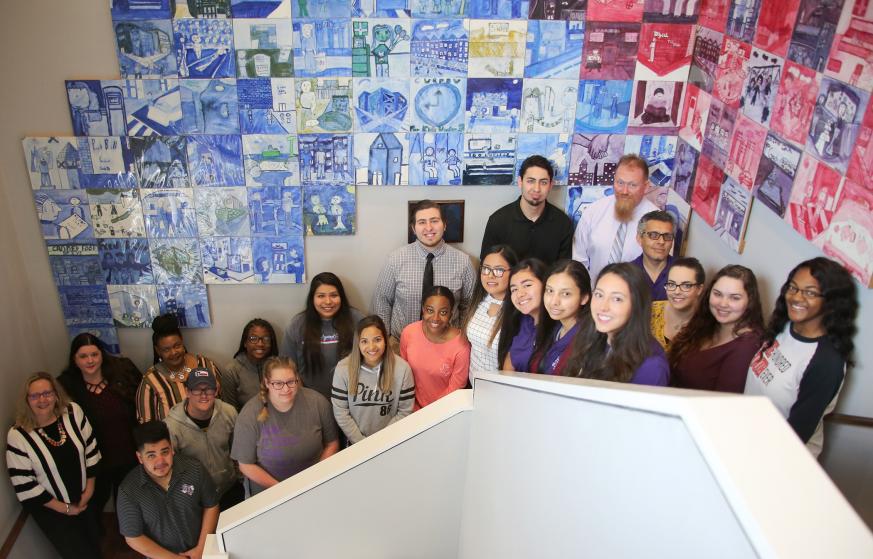 Stephen F. Austin State University faculty members and students from the School of Social Work and the Department of Languages, Cultures and Communication are working together to improve the overall mental health of the Nacogdoches community. Students gained real-world experience in facilitating and translating conversations with community members in meetings designed to identify the county’s mental health needs.


Through a $410,000 Hogg Foundation for Mental Health grant, students in Stephen F. Austin State University’s School of Social Work and Department of Languages, Cultures and Communication pulled their collective knowledge, skills and resources to involve Nacogdoches County residents in addressing their own mental health needs.

In July 2018, the Hogg Foundation awarded $4.5 million in grants to six Texas organizations to support collaborative approaches to well-being in rural communities. The grants are aimed to strengthen efforts to transform the environments where people live, learn, work, play and pray, bringing a population health approach to support resilience, mental health and well-being.

“The focus of this grant is primarily engaging with the community while developing a common agenda aimed at improving wellness, well-being and mental health,” said Dr. Stephen Cooper, associate director of research and professor of social work at SFA. “We are using an appreciative inquiry method to develop a common agenda for the grant. We are working with a group of community members to analyze data from our community meetings, which will allow us to continue moving forward with subsequent grants that will follow the current grant.”

According to the Hogg Foundation for Mental Health’s website, each grantee had considerable flexibility in developing its community collaborative and approach to ensure participation from historically excluded groups. However, all the grant recipients had to demonstrate a commitment to shared learning, provide detailed plans for community inclusion and participation, and address the need for inclusive leadership that does not reproduce existing inequities.

“The Hogg Foundation provided us with the resources to ask our rural community what they need and want to come out of this project instead of providing funding with an agenda on how to do it from an outsider’s perspective,” Megan Knight, a Winnsboro graduate student pursing her master’s degree in social work, said. “The foundation understands and accepts the idea that those who live in Nacogdoches County know what is best for their own community.”

The community conversation cafés were designed to engage people from all economic, academic, social and political backgrounds. According to Knight, too often, many community members are unsure of how to voice their opinions, so the School of Social Work created a place where all voices could be heard.

“Many people won’t attend events unless they are invited by someone they know and trust. We spent many days out in the community asking people to come or advocating for our cause, figuring out where to hold our community conversations, how to reach all populations throughout the county and how to encourage attendance,” Knight said.

“Students enjoyed interacting with people of different ethnicities and discussing our common concerns regarding changes in the community,” Wallace said. “Some students had an opportunity to hear from older adults about the community’s readiness for change, and overall, the students agreed this was a great opportunity to bridge the gap between SFA and the larger community.”

One of the purposes of the grant is to close the gap in the Nacogdoches community and to include all population groups from the community in conversation cafés, which is something the School of Social Work knew they would need assistance with.

“The foundation wanted us to focus on populations typically underrepresented in community decision-making,” Cooper said. “Dr. Mark Barringer, associate professor of history, connected us with Dr. Mario Jimenez and his students, who assisted our efforts in reaching out to and including Hispanic community members.”

Barringer, who also serves as the director of the Center for Regional Heritage Research, connected Jimenez, adjunct faculty member in SFA’s Department of Languages, Cultures and Communication, to the grant project. During conversation cafés, Jimenez’s translation certification students played a vital role while practicing their skills.

“We were able to serve as the liaison for the Hispanic community and SFA,” said Salvador Rodriguez, an undergraduate student working toward his translation certification. “We talked to people about their problems, asked them questions and acted as their voice.”

Cooper said the group will begin conducting focus groups with the hope of holding town hall meetings in the fall to discuss the findings from the conversation cafés and meetings with community members. To learn more about the School of Social Work’s involvement with the Hogg Foundation, contact Cooper at scooper@sfasu.edu or (936) 468-2845.